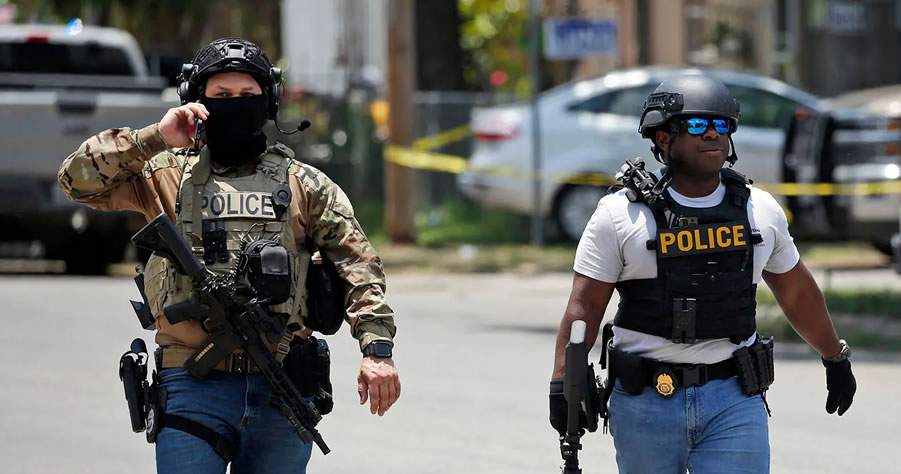 A teen gunman opened fire at a Texas elementary school Tuesday, killing 20 people — including 18 kids and two adults — before he was shot dead by police in one of the deadliest school slaughters in US history, officials said.

The shooter, identified as Salvador Ramos, 18, allegedly shot his grandmother before heading to Robb Elementary School in Uvalde with two assault rifles around 11:32 a.m. local time, according to officials.

The crime spree — eerily evocative of the 2012 Sandy Hook shooting that left 26 dead — took place just two days from the end of the school year and sent parents scrambling in a mad search for their children.

“This is just evil,” Rey Chapa, whose nephew attends the school that hosts 2nd, 3rd and 4th graders, told the New Yorkbu Times. “I’m afraid I’m going to know a lot of these kids that were killed.”

Brandon Elrod told ABC 13 he was searching for his 10-year-old daughter.

Choking back tears, he then asked a journalist at the scene where the nearest funeral home was, “’cause we can’t find my daughter.”

“Pretty sad, really sad, what this world’s coming to,” he added.

Police officials from the Texas Department of Public Safety, US Customs and Border Protection and a slew of local agencies descended on the tiny town located about 60 miles east of the Mexico border to respond to the shooting, which has left residents reeling.

“Texans across the state are grieving for the victims of this senseless crime and for the community of Uvalde,” Gov. Greg Abbott said in a statement.

“Cecilia and I mourn this horrific loss and we urge all Texans to come together to show our unwavering support to all who are suffering. We thank the courageous first responders who worked to finally secure Robb Elementary School.”

Tuesday’s shooting was one of the worst school massacres in US history — in 2012, 20 first graders and six educators were killed in a shooting at Sandy Hook Elementary School in Connecticut. Thirty-two people died in a shooting at Virginia Tech in 2007.