234,088 migrants encountered at southern border in April, most in a century 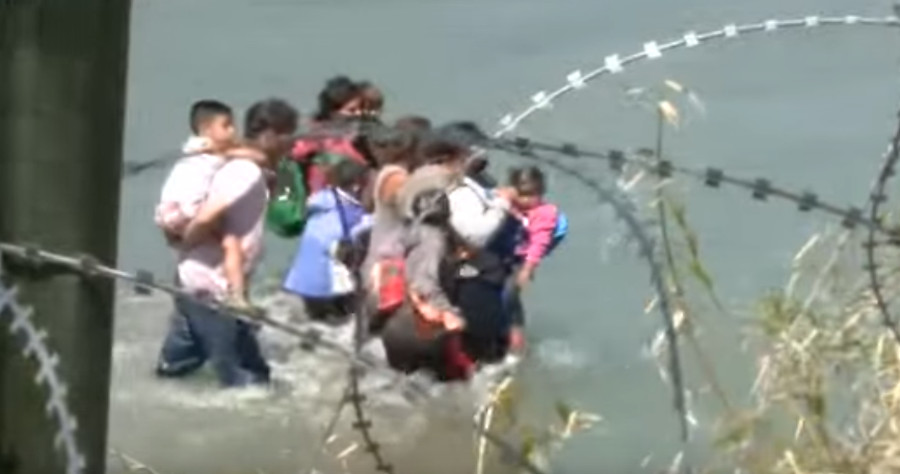 The number of migrants encountered attempting to enter the United States illegally from Mexico rose in April, surpassing all previous records over the past century, an indication of the scale of the illegal immigration crisis at the border.

U.S. border officials intercepted 234,088 migrants attempting to enter the country illegally last month, according to a federal court document obtained by the Washington Examiner late Monday. In the first 15 full months of President Joe Biden’s term in office, federal law enforcement officials at the southern border have stopped more than 2.75 million people attempting to cross into the U.S. without permission.

U.S. Customs and Border Protection, the federal agency that inspects people and goods seeking admission, said 32,288 people tried to cross at the land ports of entry but were denied. The figure is nearly three times the 11,397 figure seen in March, the result of thousands of Ukrainians fleeing to Mexico’s northern city of Tijuana and then seeking asylum at the San Diego border. The Biden administration has instructed CBP’s Office of Field Operations officers at ports of entry to allow Ukrainians into the country despite its not doing the same for many other migrants from other countries.

The remaining 201,800 of the 234,088 encounters were taken into custody after crossing the border and surrendering to or being apprehended by Border Patrol agents. Of the 201,800 figure, 157,555 individuals were encountered, with some being stopped trying to enter a second time after being previously turned back, according to CBP data released Tuesday.

The 234,088 is the highest number on record, outpacing 220,063 at the southern border in March 2000, federal data show. CBP does not list monthly data predating 2000, when it only tracked Border Patrol arrests of illegal immigrants, whereas today’s number includes illegal crossings and those denied admission at ports. Nevertheless, the figures from 2000 are likely the highest monthly numbers since the Border Patrol was formed in 1924.

Roughly seven in 10 of migrants — 166,814 — encountered at the southern border were adults traveling alone. Slightly more than half were immediately removed from the United States.

More than 12,000 were children who crossed the border without a parent, and the remaining 54,000 arrived as part of a family.

The number of encounters rose by nearly 70,000 from February’s 165,000 as news spread that the Biden administration would stop immediately returning illegal immigrants to Mexico and other countries in the coming months. The administration announced on April 1 that it would end Title 42 , the pandemic health policy that resulted in 1.7 million migrants being immediately turned back. The policy is set to expire Monday, though a federal judge indicated last week that he would intervene to continue it.

Fewer than half of those intercepted (96,908) were expelled under Title 42 despite the policy being in effect for another week. An additional 16,000 were removed through other procedures.

Of the Border Patrol’s nine regions along the 2,000-mile border, more than half of all illegal immigrants intercepted in April occurred in Texas-based sectors. The Gulf Coast-adjacent Rio Grande Valley in South Texas saw 41,776 encounters, followed by 40,855 in Del Rio, Texas.

On average, Border Patrol had 11,204 people in custody each day in April, more than 200% over its legal capacity.

The number of people encountered at the southern border each month has fluctuated for years. From the 1920s through the 2000s, Border Patrol agents encountered mostly Mexican men trying to enter unlawfully. The arrests were referred to as apprehensions. The term encounters later grew to include people denied entry at the official crossing points.

Monthly encounters dropped to 20,000 in April 2020, marking the lowest number in decades. Illegal crossing attempts from Mexico began to rise as the Border Patrol turned away migrants under pandemic restrictions rather than referring them for prosecution and placing them in removal proceedings. The 20,000 figure rose to 71,000 by December 2020, weeks before Biden took office.

When Biden took office in January 2021, his administration stopped turning away children who showed up alone at the border, as had been protocol under Trump. In that time, more children have arrived at the southern border than at any other time in U.S. history.

Biden also attempted to halt deportations for 100 days, suspended border wall construction, and vowed to rescind initiatives that turned away asylum-seekers at the nation’s borders, moves that sent a signal to the world that likely prompted many to travel to the U.S. In addition, the pandemic has had the harshest economic effect on Latin American nations, leading more people to flee to the U.S. and other countries in the Western Hemisphere.

As a result, illegal entry attempts quickly rose, topping 169,000 in March 2021 as Biden rescinded Trump-era border policies, including the Migrant Protection Protocols that had forced migrants to live in Mexico while asylum cases were processed in U.S. courts.

Biden initially downplayed the uptick in illegal migration last spring as “seasonal.” Homeland Security Secretary Alejandro Mayorkas rolled out a four-pronged plan last spring to stem the flow of migrants illegally entering the country. The plan included addressing the root causes that lead people to leave their home countries, rebuilding the asylum process, improving border security management, and taking down smugglers. To date, the Biden administration has not made substantive progress in any of the four areas.

The numbers continued to spike through last summer. Encounters topped 210,000 in July and 195,000 in August. The numbers dropped through the fall and winter months but have begun to climb, now blowing past last year’s summer levels.

The situation at the southern border , already a humanitarian and national security crisis, threatens to become far worse in the weeks ahead as DHS has predicted as many as 18,000 people being taken into custody each day once Title 42 ends. At present, border officials are encountering 8,000 people daily, a far cry from the “1,000” figure that the Obama administration once said constituted a crisis.

The extent of illegal immigration is not fully known because federal data only track those who were intercepted and cannot account for people who were not detected or evaded arrest. Because Border Patrol agents have been pulled from the border to transport and process those arriving, areas of the border have been left unmanned.