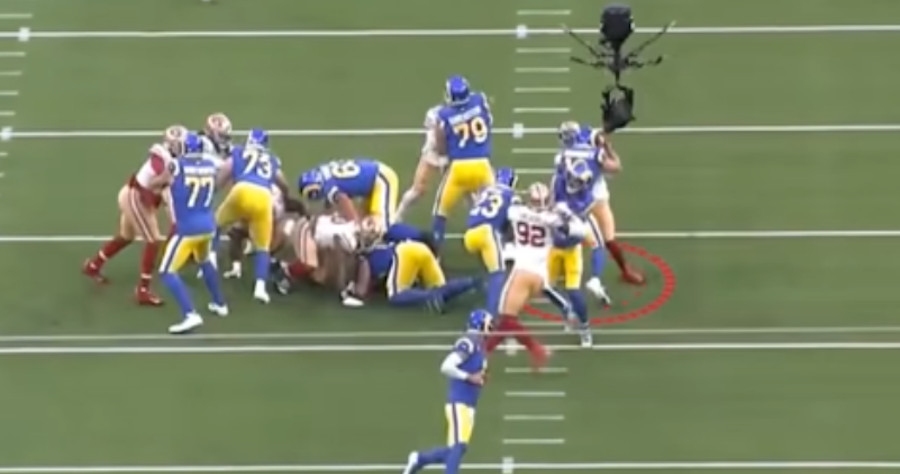 The Los Angeles Rams are the second team in as many years (and history) to play the Super Bowl in their home stadium. In 2021 the Buccaneers got to experience the joy of hoisting the Lombardi Trophy in their house, and the Rams are going to get to do the same.

Yesterday I went over why the Bengals will win the Super Bowl, now it’s the Rams turn. There’s a distinct difference in their paths. A lot of different elements need to come together for Cincinnati to win, which makes it a possibility — but improbable. Heck, that’s why they’re the underdog here. The truth is, the Rams are simply really, really good. They don’t really need a special plan of attack, or tricks to win this matchup. It’s just about relying on talent of their entire roster and comparing it to the Bengals, who are still very much a work in progress.

Not to take anything away from Donald’s speed, strength or drive, but he’s also a player who has really benefitted from offensive changes to the NFL. Interior linemen have been valued less around the league as teams focused on the pass and reduced the focus on the run. Salary cap has been spent on tackles for years now, with guard becoming more or less an afterthought for a lot of teams.

So, when the whole league is loading up to deal with edge rushers, they leave themselves open for an elite pass rushing defensive tackle. Fast forward and that’s part of the reason Donald had 12.5 sacks this season and tore teams apart.

The team that had the most success beating the Rams was the 49ers, with two regular season wins and a very narrow loss in the NFC Championship. Know what they have? A Pro Bowl guard in Laken Tomlinson, a Pro Bowl center in Alex Mack, and another decent interior lineman in Daniel Brunskill. Having talent in the middle is the only hope of shutting down Donald, and even then you need to double him.

Know what the Bengals don’t have? Interior offensive line talent. In the Divisional Playoff round Titans’ defensive tackle Jeffrey Simmons recorded three sacks to lead the team. This means that unless Cincinnati has a way to adjust, Donald is going to eat, and eat well in the Super Bowl.

So if you’re Joe Burrow you know that Aaron Donald is going to be in your face for a lot of the game. There’s not much you can really do about it, so the plan has to be to throw shorter routes and get the ball out as quickly as possible to mitigate the interior rush.

Now, this normally isn’t an issue for Cincinnati, who have elite wide receivers who can take the ball up field with yards after the catch. However, Jalen Ramsey not only has the ability to keep up with Ja’Marr Chase and Tee Higgins, but the physicality not to get bumped off the line of scrimmage. Add in the ability to jump routes and make plays on the ball from a QB who is desperately trying not to get driven into the dirt, and there’s a strong possibility Ramsey can win his matchup and dominate from the outside.

The Rams are a very different team from their last Super Bowl appearance, but no area is this more pronounced that quarterback. Los Angeles realized Jared Goff wasn’t going to be able to take them to the highest level, and saw the potential of getting Matthew Stafford to fill that role.

I maintain this was still a mutually beneficial trade for both sides, but there’s no doubt that Stafford has become on of the biggest difference makers in the NFL this season. He’s taken the Rams from being very good, and put them in the Super Bowl. Nobody singularly has benefitted more than Cooper Kupp.

Kupp went from being a decent receiver to the best in the NFL without much question. He and Stafford are just in sync whether it’s on deep passes that showcase Stafford’s tremendous arm talent, or rifling it in where Kupp cap pick apart zone defenses and scamper for 15-20 yards without much problem.

To say that a team “wants it more” is kind of dumb, I know. Everyone wants to win a Super Bowl in the NFL, so this isn’t a question of drive or desire. However, there’s no doubt that many of the Rams’ players know their window is closing, so there’s a sense of urgency to their game that the Bengals will lack.

Some of the players experienced the loss of being beaten by the Patriots, others recently arrived in Los Angeles for one last run — this could be the last, and best opportunity for Stafford to win a ring. That adds up to a lot of pressure, but also plenty of fuel to fire them forward.

Meanwhile the Bengals, they just don’t have that. They’re a young, hungry underdog with an immensely bright future, but not necessarily the same “have to win right now” drive. This is a double edged sword that could result in the Rams playing a little tight, but more likely it’ll mean they’re laser focused and ready to win.