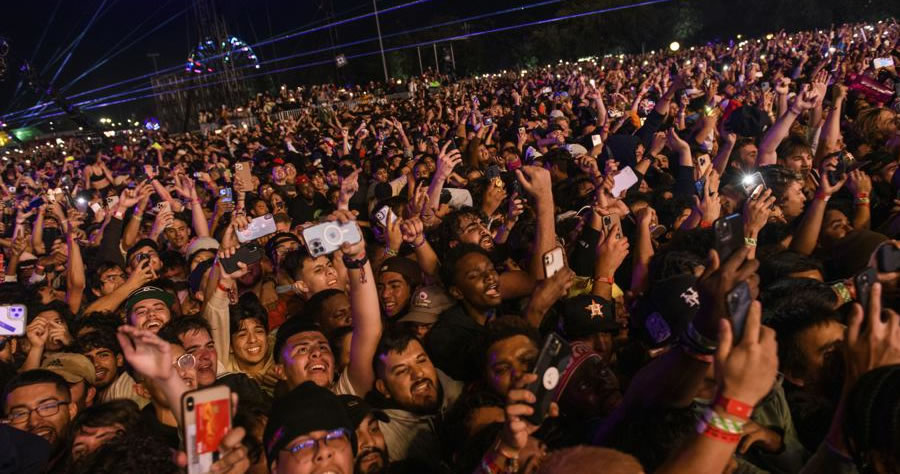 HOUSTON (AP) — At least eight people died and numerous others were injured in what officials described as a surge of the crowd at the Astroworld music festival in Houston while rapper Travis Scott was performing.

Officials declared a “mass casualty incident” just after 9 p.m. Friday during the festival where an estimated 50,000 people were in attendance, Houston Fire Chief Samuel Peña told reporters at a news conference.

“The crowd began to compress towards the front of the stage, and that caused some panic, and it started causing some injuries,” the fire chief said. “People began to fall out, become unconscious, and it created additional panic.”

The show was called off shortly thereafter. The fire chief said “scores of individuals” were injured.

Officials transported 17 people to hospitals, including 11 who were in cardiac arrest, Peña said. It wasn’t clear whether all eight who died were among the 17 that had been transported to hospitals. Many people were also treated at the scene at NRG Park, where a field hospital had been set up. About 300 people were examined at that site throughout the day, he said.

Astroworld is a two-day music festival that was scheduled to take place Friday and Saturday in Houston. The event was sold out, according to the Astroworld website. Saturday’s performances have been canceled.

The deaths called to mind a 1979 concert for The Who where 11 people died and about two dozen were injured as thousands of fans tried to get into Cincinnati’s riverfront coliseum.

Scott, one of music’s biggest young stars, released two new songs earlier Friday, “Mafia” and “Escape Plan.” The 29-year-old Houston native has been nominated for eight Grammy Awards. He has a 3-year-old daughter, Stormi, with Kylie Jenner, who announced in September that she’s pregnant with their second child.