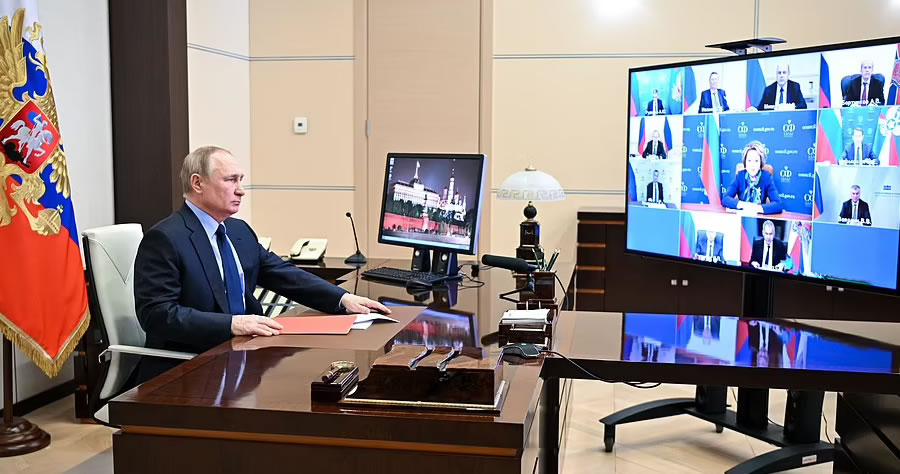 Invading another nation, bombing hospitals, and killing civilians is not enough to get you kicked off of Twitter, but calling for peace and order will get you banned.

Russian President Vladimir Putin’s Twitter account, which has 1.5 million followers, remained active as of Friday, as Putin’s forces continue their invasion of Ukraine and attacks on the Ukrainian people. Ukrainian authorities have reported more than 2,000 civilian deaths, with attacks on residential areas and maternity hospitals. Meanwhile, Putin used his Twitter account to spread propaganda about the conflict, calling the invasion a “special military operation to protect Donbass.”

The Big Tech website’s rules claim to “prohibit the glorification of violence,” but Twitter is less interested in going after foreign aggressors than policing speech at home. Twitter locked and then permanently nuked former President Donald Trump’s Twitter account after he posted a video on Jan. 6, 2021, imploring rioters at the Capitol to “go home now” and that “we have to have peace.” Before that, a study showed Facebook and Twitter had already censored Trump 65 times.

Meanwhile, just Monday, U.S. Rep. Vicky Hartzler, R-Mo., said Twitter suspended her account after she stated that “women’s sports are for women, not men pretending to be women.”

But while Twitter eagerly tracks down and punishes Americans for saying boys and girls are different, the platform has repeatedly allowed brutal foreign regimes to keep their accounts. Ali Khamenei, supreme leader of Iran, maintains an account with nearly 900,000 followers, despite using his Twitter to call for Israel to be “uprooted and destroyed” and pledge support for anyone who “opposes and fights the Zionist regime.”

Serious question for @Twitter: Do these tweets from Supreme Leader of Iran @khamenei_ir violate “Twitter Rules about glorifying violence”? pic.twitter.com/oEkCC8UzFV

In 2020, a Twitter spokeswoman insisted that “foreign policy saber-rattling on military-economic issues” was “generally not in violation of our rules.”

Twitter has also continued to allow Taliban spokesman Zabihullah Mujahid to use his official account to push Taliban propaganda, during and since the group’s violent takeover of Afghanistan in August. “Twitter permitted the Taliban official spokesman to live-tweet Mujahideen terror, the acquisition of arms, storming the Afghanistan capital, and the occupation of the presidential palace,” academic Adrian Hilton observed.

Twitter banned Donald Trump for expressing support for rioters who stormed the US Capitol. Twitter permitted the Taliban official spokesman to live-tweet Mujahideen terror, the acquisition of arms, storming the Afghanistan capital, and the occupation of the presidential palace. pic.twitter.com/Zs20tL93Gb