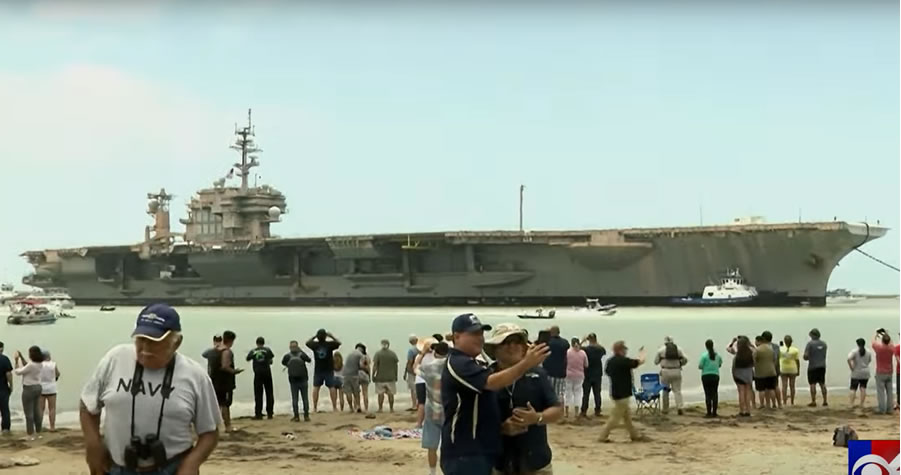 The decommissioned aircraft carrier USS Kitty Hawk completed its journey to Brownsville, Texas, this week where she will be scrapped by International Shipbreaking Limited (ISL).

The vessel, commissioned in 1961 and decommissioned in 2009, arrived in Texas Tuesday after being towed from Bremerton, Washington, MyRGV reported. ISL held a ceremony for her arrival at Isla Blanca Park on South Padre Island as she entered the 17-mile channel leading to the Port of Brownsville, following her 16,000-mile voyage. Hundreds of spectators attended the event, according to MyRGV. Some of those present were Navy veterans lining up for a final glimpse of the ship upon which they served.

Navy veteran Juan J. Montelago was stationed on the ship between 1990 and 1994 and told MyRGV the scene was “a tearjerker.”

“It’s emotional because that’s the ship there that made me who I am,” Montelongo said. “I was able to be part of a group of people that I loved and to this day I try to keep in touch.”

Veteran Jeff Kyle, of Spokane, Washington, made the trip to Texas to get a look at the ship he served on from 1980 to 1982, according to MyRGV.

“It’s a sad day,” said Kyle, who was a flight deck director on the Kitty Hawk. “It was the first ship I was on. They were great days.”

The aircraft carrier saw action in the Vietnam War and earned a Presidential Unit Citation in 1969 for her “exceptional performance during the fierce fighting of the enemy’s Tet Offensive,” the U.S. Navy noted. Decades later in 2003, the USS Kitty Hawk was active in the Iraq War, before being decommissioned in 2009. From there, she was brought to the Navy’s Inactive Ships Maintenance Facility in Bremerton, Washington, where it remained before embarking on her journey to Texas in January, in which she was towed around the tip of South America.

SL is part of the EMR group and secured a U.S. Navy contract to dismantle the ship, along with the USS John F. Kennedy last year, MyRGV reported at the time. Contrary to reports that the ISL purchased each of the ships for a mere penny each, the company said in a January Facebook post that it “is providing a recycling service to the US Navy at the lowest cost possible to the US taxpayer (1cent).”

International Shipbreaking Limited’s 2021 purchase of Kitty Hawk dealt a final blow to some veterans’ desires to make the ship into a museum, similar to the five other aircraft carrier museums throughout the United States, USNI News previously reported. One problem facing efforts to make the ship a museum was finding a city to house the super carrier that did not already have an aircraft carrier museum, Ryan Szimanski, the executive director of the Historic Naval Ships Association, told USNI News at the time.