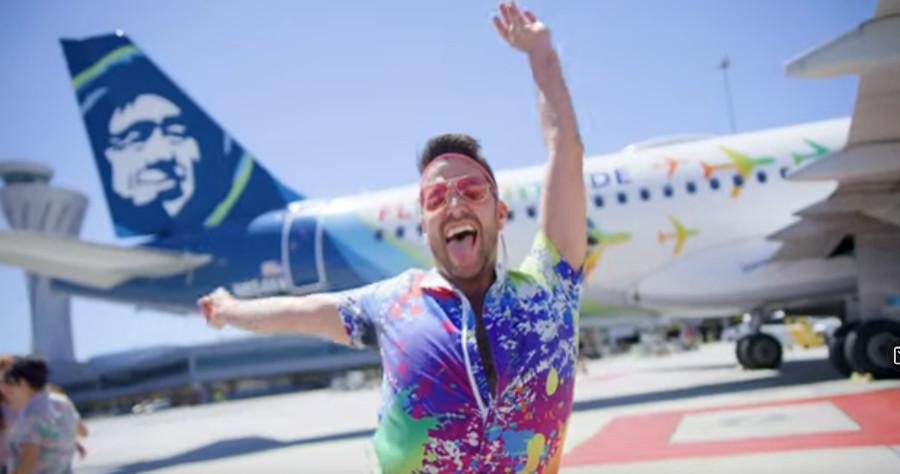 In another case of a major company bowing to the loudest .6% minority of the population, Alaska Airlines has decided to implement “gender-neutral” uniforms for its flight attendants, as well as updated grooming guidelines which will turn your next flight into a high-altitude freak show, 770-KTTH’s Jason Rantz tells us.

Alaska Airlines has their priorities in order even as flights get canceled and the airline can’t find enough pilots. In describing its new woke policy, the airline said that aside from the gender-neutral uniforms, they will now allow nail polish to be worn by biological males, the addition of more tattoos and piercings, and a variety of hairstyles.

And in case you aren’t sure how to address the flight attendant bringing you coffee or soda, or the person who is issuing your ticket, so-called front line employees will now be permitted to wear a button identifying their preferred pronouns.

Sadly for the alphabet community, at present Alaska will limit those pronouns to “he/him,” “she/her,” and “they/them.” In other words, they need to step up their woke game.

Alaska Airlines announced the new changes in a rather lengthy blog post on the company’s website. The post tells a series of stories about different Alaska Air employees who use all manner of different gender identities to put a face and name to the woke employees of the airline.

“I answer to all pronouns,” says Isaac, a lead customer service agent in Washington, D.C. “I feel that there has been greater awareness and sensitivity to personal pronouns, and I love that. But I’m also cognizant that changes take time and I want our society to feel comfortable with how they view and communicate with me.”

“I love who I am and I refuse to make myself smaller in order to be accepted. This is one thing that I can’t compromise over,” said Monique Mo, a flight attendant based in San Diego. “We all want to look professional, and we all want to be ourselves at the same time—your gender shouldn’t identify what you wear or how you look.”

“Alaska gets it and we’re making the right choices and moving in the right direction,” said someone named David, a lounge concierge. “It’s what I expect from Alaska/Horizon. We do the right thing. It’s part of our culture.”

Then there is Jason, an Alaska Air flight attendant by day and a drag queen at night, who chose to come out at his (oh sorry, “their) senior prom.

“I didn’t do it to make anyone uncomfortable or be the first. I did it for me, and that’s all that matters.”

So once again, we have a major company appeasing the very small, infinitesimal minority at the expense of the majority. As Rantz highlights in his piece, however, what happens if some of that majority refuse to play along?

Because despite what the radical leftists tell us, there are two genders…period. Two X chromosomes equals female, an X and a Y chromosome equals male…follow the science. Are there some people who have the mental illness called gender dysphoria? Clearly, but as noted, they are an extremely small minority of the population.

Yet the remaining 99.4 percent of the population is expected to ignore science and biology and give in to the woke mob. And that woke mob tends to be comprised primarily by so-called “allies” who virtue signal how hip they are because they disregard tens of thousands of years of science and buy into the Baskin & Robbins 57 flavors of gender identity.

So again, what happens if a passenger at 35,000 feet decides not to play along? Will they face the same fate as mask scofflaws who refuse to wear the face diaper? In fact, Jason, the drag queen, acknowledges that some customers might feel uncomfortable with a flight attendant with a beard wearing nail polish.

Jason, who supports the uniform changes said he hopes to get Alaska Airlines’ “support if faced with adversity among peers or guests who may find it difficult to see them [him] wearing nail polish.”

That “support” isn’t defined by Jason, but given what we have seen over the past two years with COVID enforcement, it’s not too far a stretch to picture a passenger who expressed their opinion about a bearded man wearing nail polish and nose piercings being forced off an aircraft and on to a “no-fly” list.

Rantz reached out for an answer to that very question, and an Alaska Airlines spokesperson said they “would not remove a guest for using incorrect pronouns.”

Of course as Rantz notes, most of this is a load of bluster by Alaska Airlines, signaling to the alphabet community and their “allies” that they are woke, while knowing at the same time that despite the gender-neutral uniforms and cool pronoun buttons, it will only be a small minority of Alaska Air employees who in fact act as their “most authentic selves” at work.

As far as the “gender neutral” uniforms, they really aren’t all that much unlike uniforms current flight attendants wear. In this case, they’re a button up shirt and tie, which can also be worn by women, however does that truly make them gender neutral uniforms? As Rantz said, “it’s merely a woman wearing a tie.”

“This is what it means to care—to ensure everyone can bring their best and most authentic selves to work and to be an inclusive and welcoming environment for employees and guests alike. That’s the journey we’re on, and the future of Alaska Airlines,” said the blog.