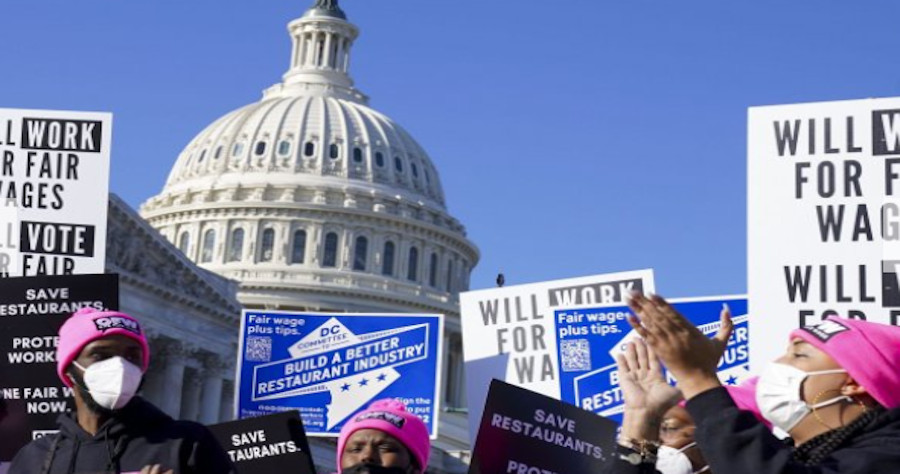 A health-related report that examines numerous issues for American families, such as wages and rising costs, said on Wednesday that economic security is out of reach for many people in the United States — particularly women and women of color who are still at a fiscal disadvantage compared to men.

The assessment, the 2022 County Health Rankings & Roadmaps report, looks at a number of key issues facing working Americans and found that most need a pay increase of more than 70% before they can earn a living wage.

At worst, in some counties across the United States workers need a 229% pay increase to earn a living wage.

The 20-page report was created by the University of Wisconsin Population Health Institute, which is funded by the Robert Wood Johnson Foundation.

“The data reinforces what we’ve known for some time. People in both rural and urban communities face long-standing barriers, systemic barriers — avoidable barriers — that get in the way of groups of people and places in our country from being able to live long and well,” Sheri Johnson, co-director of County Health Rankings & Roadmaps, told ABC News.

Wednesday’s report said that researchers compiled data and offered guidance for leaders and communities to improve the lives and health of Americans. The data paint a picture of economic insecurity that’s impacting the health of working Americans.

According to the analysis, an average living wage of $35.80 an hour is needed across all U.S. counties for a household with one adult and two children. That wage figure ranges from $29.81 per hour and rises to a high hourly rate of $65.45.

Wednesday’s assessment said that the pay gap between men and women “is especially harmful to the health of working women responsible for covering basic needs and providing for those who depend on them.” File Photo by Brian Kersey/UPI

Researchers found that working women and women of color are particularly affected by the disparities in pay.

“For decades, working women, particularly women of color, have navigated employment discrimination, been segregated into female-dominated sectors such as service, education and health care, and received less pay for equal work,” the report states, adding that racial and gender discrimination are still constant factors at all stages of employment.

The COVID-19 outbreak, it said, compounded economic insecurity and worsened conditions for millions. Over the course of the pandemic, it found that women’s participation in the workforce fell to a 30-year low.

“The pandemic both revealed and worsened the burdens and barriers that women, people of color, and people with low incomes face,” the authors said. “It also underscored that resources have not been distributed fairly within and across communities.”

Although strides have been made over recent decades toward closing the wage gap between men and women, Wednesday’s analysis said that women are still earning only about 80 cents for every dollar that men make.

A Hispanic woman, it said, would have to work roughly 300 more days to earn the average annual salary of $61,807 given to White male workers in the United States.

The pay gap, it explained, between men and women “is especially harmful to the health of working women responsible for covering basic needs and providing for those who depend on them.”

The assessment also noted that working Americans continue to struggle with paying for child care. It found that a household with two children spends an average of 25% of its income on childcare — more than three times the affordability benchmark of 7%.

Further, public schools are underfunded and education centers in half of all U.S. counties are operating on budget deficits.

Researchers said that about $3,000 more per student, per year is needed to support achievement of national average test scores.

“By recognizing how historic and current policies and systems create disadvantage, we can allocate resources where they are most needed so that economic inclusion, good health, and prosperity are shared by all,” the authors said.

“This report is a call to action to strengthen relationships across sectors to advance economic security and health for everyone.”