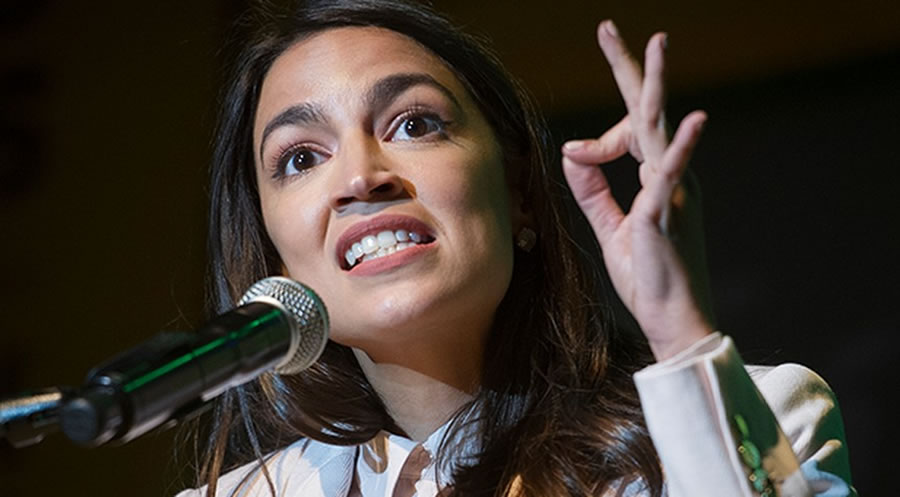 Rep. Alexandria Ocasio-Cortez (D-NY), a former bartender who now makes $174,000 as a member of the U.S. House of Representatives, says capitalism is “not a redeemable system.”

Are you swamped by the bog of big words? And are some of those long-lettered combinations indicative of your liberty as an American?

According to a congresswoman, you may be making a mistake.

Yahoo! Finance recently posted an interview with Democrat Rep. Alexandria Ocasio-Cortez, and the lawmaker laid down the law on systems of government.

As it turns out, you should stop being so sensational:

“I believe that in a broad sense, because when we toss out these big words — capitalism, socialism — they get sensationalized.”

Remarkably, she went on to point out something painfully and obviously true:

“[P]eople translate them into meaning things that perhaps they don’t mean.”

In fact, so far as I can tell, many who support the congress lady fall into that group:

ALEXANDRIA OCASIO-CORTEZ: I believe that in a broad sense because when we toss out these big words, capitalism, socialism, they get sensationalized. And people translate them into meaning things that perhaps they don’t mean. So to me, capitalism at its core, what we’re talking about when we talk about that, is the absolute pursuit of profit at all human, environmental, and social cost. That is what we’re really discussing.

And what we’re also discussing is the ability for a very small group of actual capitalists– and that is people who have so much money that their money makes money, and they don’t have to work. And they can control industry. They can control our energy sources.

They can control our labor. They can control massive markets that they dictate and can capture governments. And they can essentially have power over the many. And to me that is not a redeemable system for us to be able to participate in for the prosperity and peace for the vast majority of people.

ANDY SERWER: So people talk about stakeholder capitalism like Larry Fink at BlackRock where the weighting for different constituents besides shareholders is more equal. Is that something you’d be amenable to?

Now, where we can transition to and there are certain ideas where we’re talking about– for example, Elizabeth Warren has discussed workers being elected to the governing boards of companies. And also, we’re here in the Bronx. I represent a community that has the largest concentration of worker cooperatives in– you know, one of the largest concentrations in the world.

Now, these are alternative ways of doing business. Free markets are not the same thing as capitalism. And you can have markets where businesses and ways of producing, trading, selling goods are really controlled and not just controlled but giving more power to workers. People get a fair shake. Union jobs, unionized workplaces, all of these are different steps and levels that we’re talking about in a more just economy.