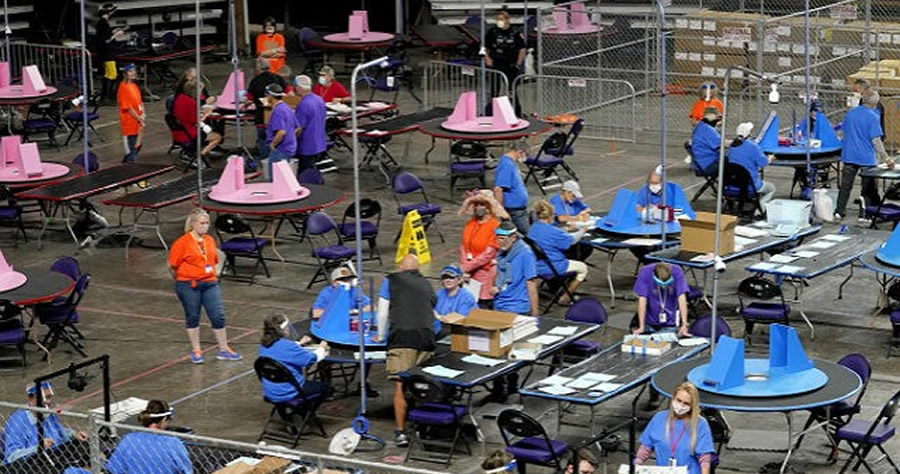 The Arizona State Senate announced on Friday that the results of the Maricopa County forensic audit of the 2020 election will be released on Friday, September 24.

The report “will be made public at a hearing scheduled for Friday, September 24, according to a spokeswoman for Arizona Senate Republicans,” CBS reported.

The report will be presented on the Senate floor and will be open to the media. Although Arizona’s election results were already certified, six months ago, the Republican-controlled state Senate in Arizona undertook a full hand recount and review of the ballots and voting machines in Maricopa, the state’s largest county.
By subpoena, the state Senate took possession of 2.1 million ballots and nearly 400 election machines and turned them over to be audited by companies that include one whose CEO promoted debunked election fraud theories after the election.

Earlier on Friday, Arizona State Senate President Karen Fann (R-1) announced that the State Senate had reached a settlement with the Maricopa County Board of Supervisors and will be receving additional documents and equipment previously requested via subpoena. Fann said in a statement released on Friday:

Under threat of losing hundreds of millions of dollars in revenue sharing, today Maricopa County settled with the State Senate, in a victory for election integrity and the Arizona taxpayer. The agreement sets up a Special Master paid for by the County, who will get the answers to the questions the Senate has had concerning the routers and splunk logs used in the 2020 election. Former Congressman John Shadegg will serve as the Special Master, working with computer technology experts. The Senate will finally get the answers to questions asked for in subpoenas issued to the County months ago.

In addition, the County has agreed to drop its notice of claim of $2.8 million to replace election equipment delivered to the Senate as required in the January subpoena. Experts have told us there is nothng that has been compromised or damaged by the audit, and the Secretary of State failed to follow procedures regarding decertifying the machines. There is no reason taxpayers should be on the hook for purchasing unnecessary new election equipment.

Wendy Rogers says when the Maricopa audit results come out on Friday, she hopes to decertify the election. She also hopes Georgia, Wisconsin, and Pennsylvania will do the same. pic.twitter.com/Eh1iZa5uHU