As crime explodes, New York governor unveils plans to reinstate bail – kind of – and of course before elections 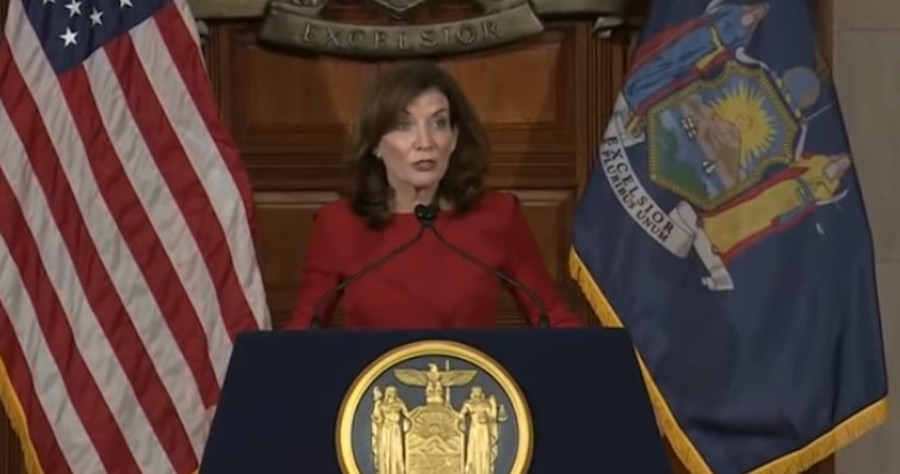 Governor Kathy Hochul, who replaced Andrew Cuomo after he resigned amid sexual misconduct allegation, has released a Public Safety Plan, and it has the backing of New York City’s mayor, Eric Adams.

“The governor’s proposal includes significant steps, which I have advocated for, that would make New York safer, while not undoing important reforms,” Adams said in a statement.

“It is a big step forward that these proposals are being discussed at the highest level in Albany, and I am grateful to the governor and the legislature for their partnership.”

The plan was announced at a time when major cities across the country are seeing a major increase in crime, especially in New York City. Ironically, it also comes just months before an election.

Among the steps that the governor wants to implement is a return to bail – but only for repeat offenders and those committing crimes with guns.

These moves have been opposed by criminal justice reform advocates, who continue to say that bail reform and the increase of violent crime in the city are completely unrelated.

However, one need not search too hard to find the scores of news stories that highlight violent crimes committed by individuals that should be locked up already, but…bail reform.

The New York Post provided a synopsis of the plan. It includes:

“For the most serious felonies, allow bail determinations to be informed by factors including criminal history and history of firearm use and possession

Judges will be allowed to set bail not based solely on the ‘least restrictive’ conditions deemed necessary to ensure a return to court. The statute will set forth specific criteria on which judges will base their determinations, including criminal history and history of firearm use/possession.”

So, yes, you read that correctly. Serious crimes while in possession of a firearm could still wind up netting a personal recognizance bond if the judge determines that the defendant has no prior criminal history and only possessed the gun but didn’t use it in a dangerous way.

Another item of concern for those who favor taking care of criminals rather than the public, is the proposed change to the “Raise the Age” law. This law increased the legal age of criminal liability to 18.

Hochul wants to decrease that age to 16 if the teen commits a crime while in possession of a firearm.

But groups supporting the criminals first laws that are currently on the books think this is a bad idea.

“When a 16- or 17-year-old is arrested with a gun in New York, the goal should be to stop that young person from carrying guns in the future – not to punish him or her as an adult,” read a statement from the Raise the Age Coalition.

The Legal Aid Society took their thoughts a step further, making it about racial inequality.

“Governor Hochul’s plan to rollback New York’s historic Raise the Age statute will only lead to the caging of more young Black and Latinx New Yorkers while failing to address root causes, which in many cases are directly tied to poverty and a lack of robust services.”

The ideas shown in Hochul’s plan are being applauded by New York City’s new mayor. Eric Adams is a former captain with the NYPD. Adam’s enthusiasm is understandable, given that the city has a DA who has shown that his office will pursue virtually no charges on anyone.

Alvin Bragg took over on January 1, 2022. He immediately announced changes in how his office would prosecute cases.

There are numerous charges that they simply will not prosecute. Many others will be downgraded to lesser charges. As an example, Bragg directed his prosecutors to downgrade felony armed robbery and make it misdemeanor shoplifting. They also will not go after charges of resisting arrest.

This stance places police in a tough spot, as criminals know that they can resist and fight, and face no consequences. Criminals have been emboldened to physically challenge police authority

As reported by NBC 4:

“However, in the letter Bragg sent out Feb. 4, his office clarified that it will prosecute robberies with weapons as felonies, that gun possession cases will be default prosecution as felonies, and any attempt at violence against police will be prosecuted.

Hochul is running for re-election this fall, and multiple of her opponents, Republicans and Democrats alike, have slammed her for not removing Bragg from office, as she has the authority to do under state law.”

The governor told the Post that she was ” not prepared to undo the will of the people,” pointing to Bragg winning the DA role last November.

Still, there were some, besides Adams, who heralded the plan.

“This is the kind of leadership we need from the governor,” said state Sen. Diane Savino (D-Staten Island).

“For more than two years, Senate Republicans have joined law enforcement, district attorneys and crime victims in calling out Albany’s ‘bail reform’ and pro-criminal agenda as an unmitigated disaster. As violent crime spikes across the state, leaders in Albany have continuously ignored our pleas for reform.

Despite her initial inaction, Governor Hochul has apparently joined me and my colleagues in calling for long overdue reform. We will await details to see if these calls for change are genuine or lip-service.”