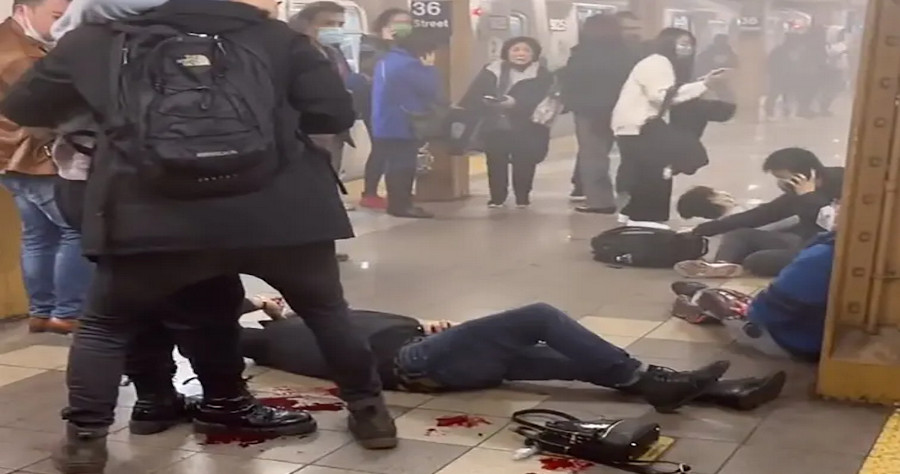 At least 13 people were injured, including five who were shot, when a suspect set off a smoke grenade and unleashed gunfire on a Brooklyn subway train during Tuesday morning rush hour, the NYPD and law enforcement sources told The Post.

The gunman — possibly disguised as an MTA construction worker and wearing a gas mask — launched his bloody assault around 8:30 a.m. on a Manhattan-bound N train at the 36th Street station in Sunset Park, where authorities later discovered several undetonated devices, FDNY and police said.

The suspect is believed to have set off the smoke grenade moments before firing off a barrage of bullets, police sources told The Post.

Cops and sources said at least five people were shot in the third car of the train and others were injured by smoke inhalation. A pregnant woman was among those

As the mayhem unfolded, the train pulled into the 25th Street station, and straphangers were evacuated to the R train across the platform, where some got off at the next stop and others were rushed to hospitals.

So far, the NYPD has not confirmed any fatalities stemming from the incident.

Footage taken from the chaotic scene showed screaming passengers spewing out onto the platform as soon as the train doors opened and clouds of smoke billowing out.

A straphanger who was on the train when the violence broke out told The Post there were so many rounds fired off, she “lost count.”

“There was like, lots of them. I don’t even know how many,” said the woman, who only gave her first name, Claire.

She said she saw the suspect — who was described as a 5-foot-5 man, around 170 pounds and wearing an orange vest and gas mask — drop “some kind of cylinder that sparked at the top.

“I thought he was an MTA worker at first because I was like, I didn’t like pay too much attention, you know, ‘You’ve got the orange on,’ ” she said.

The NYPD’s bomb squad was on the scene investigating, and authorities were scouring MTA surveillance to try to identify the suspect.

Cops asked reporters at the scene to be clearly identified so the suspect doesn’t attempt to blend in with the crowd.

Mayor Eric Adams has been briefed on the incident, a spokesman said, and the NYPD is slated to have a news briefing from the scene at about 11:30 a.m.

“While we gather more information, we ask New Yorkers to stay away from this area for their safety and so that first responders can help those in need and investigate,” the spokesman said.

Schools in the immediate vicinity have been put in lockdown, a city Department of Education spokesman said.
Read Full Story