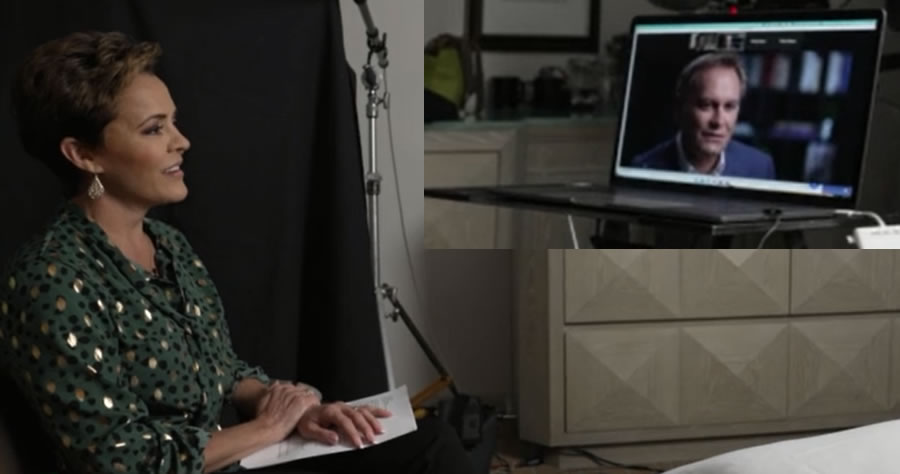 Leading Arizona gubernatorial candidate Kari Lake came from the media, so she is well versed in dealing with reporters during interviews, often bringing her own camera operators to film her interviews too, in case the media only plays selective clips. 60 Minutes Australia recently interviewed her, and sparks flew during the interview and for an extended period afterward between Lake and journalist Liam Bartlett, as Lake repeatedly called him out for the type of questions he was asking.

Lake uploaded the entire interview and their exchange afterward to Rumble in a video entitled “Kari Lake vs Lunatic ‘Journalist’ at 60 Minutes Australia.” Almost all of Bartlett’s entire interview focused on discussing Donald Trump and the January 6 protest at the U.S. Capitol, which Lake did not attend.

Bartlett began with a statement, “Donald Trump thinks you should be governor of Arizona.” Lake responded, “That’s great, I think I should too. It’s the most powerful endorsement in all of politics.” She discussed how America was declining and selling out the U.S. to China before Trump became president, and went over Trump’s America First platform.

Next, Bartlett asked her, “What’s the personal appeal of Donald Trump for smart people like you?” Lake responded, “I just told you what the appeal is.” He pressed her anyway, and she responded, “He cared about America. He gave up so much to run for president. He didn’t have to do that, he had a comfortable life. But he saw that we were being led astray.” She listed off how he kept his promises.

Bartlett then went into Trump and the election. “So being a Trump supporter, as you are, do you have to believe in the ‘big lie’ that the election was stolen, is that a prerequisite?” Lake responded, “You’re thousands of miles away, you have really no idea what happened in our elections. … The ‘big lie’ is what the media has been peddling.”

Bartlett challenged, her, “Give me hard evidence, give me real evidence.” Lake looked at several sheets of paper and listed off multiple instances of alleged fraud that the independent Maricopa County ballot audit found.

Bartlett interjected, “But Kari, you’ve had four official audits.” Lake corrected him, “We’ve had one audit, a forensic audit, that is admissible in a court of law.” Bartlett contended that courts have looked at the evidence and found no fraud. He went on, “There’s been no evidence. No evidence has been presented in a single court of law in your country that has proven there’s election fraud.”

Lake countered, explaining that the evidence from the forensic audit has not been presented yet in court. “People broke laws.” As he continued badgering her, she exclaimed, “It’s really rich having someone from Australia coming here and tell us how our elections were run. … You’re coming here from Australia, where you don’t have any freedom, and trying to tell us our elections weren’t on the up and up.”

Bartlett started to say, “Your own officials…” and Lake interrupted him, “Our own officials are corrupt!” She said she watched the Maricopa County officials testify to Congress and “they lied.” She said they certified a corrupt election.

She implored him, “Liam, I’m asking you to do some research on what’s happening as a journalist. To sit there in Australia and tell the people of your country that we have a ‘big lie’ and that everyone’s making this up — this is corruption at the highest levels of our government to allow our votes to be perverted this way and stolen.”

She asked him, “Do you think it’s okay that more than 700,000 ballots had no chain of custody? We’ve got rules; they didn’t follow them. Our voter rolls are a mess. We’ve got people who moved 10 years ago and the ballot is still going to that home under their name.”

Bartlett finally asked her about her own race: “Do you think you can win?” Lake responded, saying she believed she would, since she is much more aware of the cheating and will stop it from happening during the election. “Not an election that goes on for 45 days; we’re going to call it Election Day, not election month and a half.”