Back Off BLM: Diner Pulls Handgun On Armed BLM Protesters After Being Surrounded At Upmarket Restaurant [VIDEO] 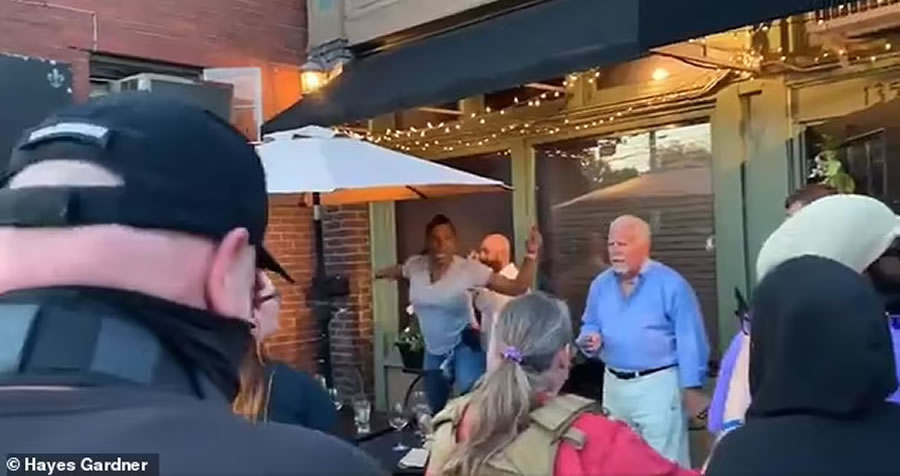 A Louisville diner brandished a handgun at armed Black Lives Matter protesters surrounding a restaurant during a demonstration for Breonna Taylor.

The unidentified man is thought to have been eating at upscale French eatery La Chasse on Saturday night when he confronted the group of around 50 protesters.

They had been marching ahead of the 147th Kentucky Derby over Taylor’s death at the hands of police during a raid at her home last March.
Video shows the diner pointing his handgun at the protesters who were arguing with him as one female demonstrator urged the group to keep moving down the block.

At least five people were arrested in connection with the incident. Charges include possession of a handgun by a convicted felon, failure to disperse and evading police, TMZ reported.

The man with his gun drawn does not appear to have been arrested.

The group is walking on the sidewalk, past police. pic.twitter.com/26wLPQbAKl

“During the encounter both patrons and protesters brandished firearms,” Smiley said in an email to Fox News. “This incident occurred after the arrests of southbound protesters in the area on the 1500 block of Bardstown Road. The arrests of that group were made after protesters repeatedly blocked the roadway despite officers giving multiple verbal requests for them to utilize the sidewalk.”