Balls Of Steel: Robbers Spray His Truck With 30 Bullets – Then It’s His Turn [VIDEO] 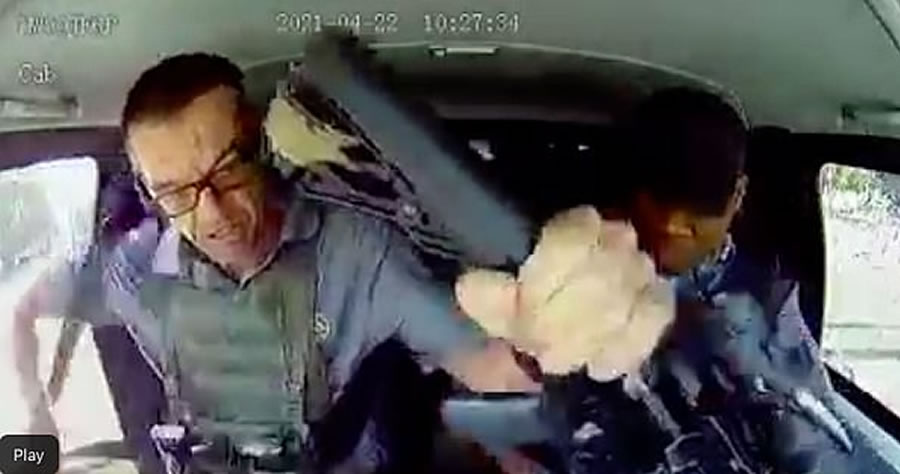 A hero South African guard has been caught on dashcam footage fighting off a gang of armed robbers who sprayed his security vehicle with over thirty bullets in a bid to kill him, before he turned the tables on them by chasing them off at gunpoint.

Former police sniper Leo Prinsloo, 48, was escorting a high value cargo in his unmarked armoured Toyota Land Cruiser when he was ambushed by two cars full of gunmen.

A dozen shots at least are first heard as one car pulls alongside security expert Leo on the N4 motorway in capital Pretoria, opening fire and finally shattering his bullet proof window.

Incredibly Leo – who was with the South African Police Services special forces unit for 12 years and teaches their military special forces to shoot – remains remarkably calm under attack.

He tells his fellow security guard to cock his automatic rifle and hits the accelerator as his attackers try to kill him so they can target the armoured car in front.

The other car full of gunmen then try from the other side and fire at least 13 shots into the vehicle but expert marksman and highly trained sniper Leo remains unperturbed.

The chasing cars try to force him to stop and fire shots into the windscreen but Leo simply rams straight into them.

When the other cars try again he rams them as well then decides on a change of tactics.

A security friend of the hero said: ‘Leo got fed up with the one-way traffic of bullets and hit the brakes and told his colleague to hand him an automatic rifle, released his seat belt and got out.

‘He had enough of being a sitting duck and decided to take the fight to the armed robbers and was not going to go down without a fight. He is an expert shot and wanted to give a little bit back.

‘When they saw Leo get out with his automatic rifle in a bullet proof vest and kneeling down to take aim they decided they had had enough and gave it up and the two cars made their escape.