Barack Obama Thanks “Vice President Biden” During Propaganda Speech To Push Obamacare…Instead of Owning It, He LIES…Says “That was a joke…That was all set up” [VIDEO] 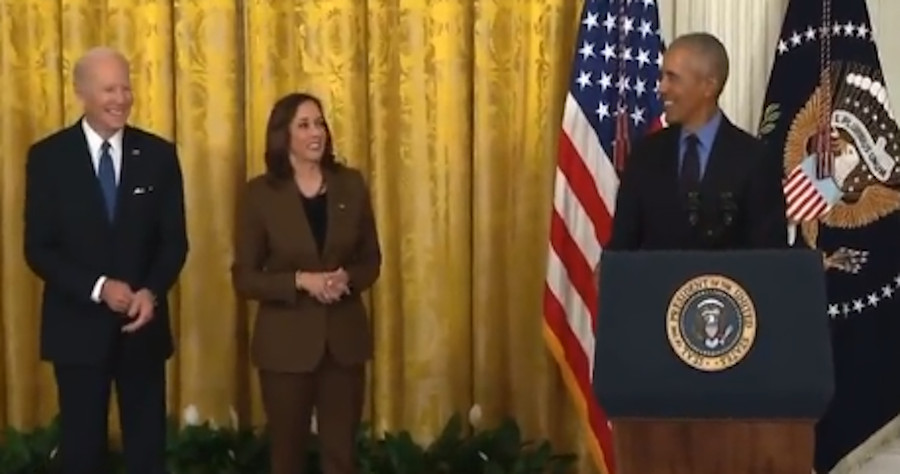 Barack Obama joined the mentally challenged Joe Biden and incompetent Kamala Harris at the White House where he took control of the messaging of the White House’s push to tmake Obamacare (socialized medicine) permanent.

Kamala Harris spoke first then turned the microphone over to former President Barack Obama. After receiving a rousing round of applause, Barack Obama told the crowd to “sit down.” He started his speech by acknowledging Joe Biden and Kamala Harris. “Vice President Biden, Vice President…” Barack said as he was looking down at the podium, leaving everyone to wonder if Joe Biden’s mind was suddenly transported into Barack Obama’s body. Once he caught the gaffe, Barack laughed. Instead of owning the mistake, he cooly walked over to Joe to shake his hand, saying, “That was a joke. That was all set up!”

It’s entirely possible the idea of stepping out of the shadows and in front of an adoring crowd of fans was overwhelming for Barack, causing him to forget he’s no longer president. It’s also entirely possible the whole scene was staged to make it look like the gaffes made by the current White House occupant, aren’t such a big deal because even Barack makes gaffes.
It’s hard to know what’s real and what’s being faked with this dirty administration.