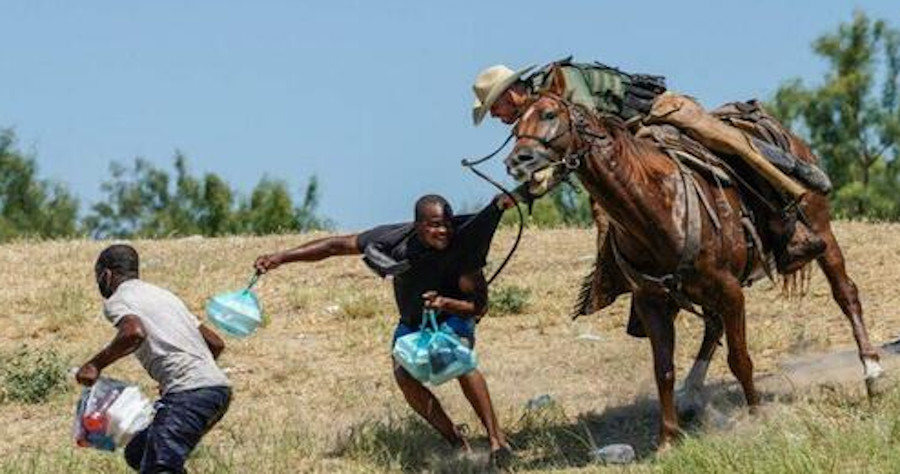 At the height of the Stalinist purges, Soviet internal affairs minister Lavrentiy Beria famously boasted: “Show me the man and I’ll find you the crime.”

U.S. Border Patrol agents may be wondering if the Beria standard is back in vogue with the Biden administration. The reason: Fox News has reported that the Department of Homeland Security is moving to charge several agents with administrative violations after they were falsely accused of whipping Haitian migrants last September in Texas.

The agents likely felt their fates were sealed the minute that President Biden promised to punish them, before an official investigation had even started. Either the president was wrong, or the agents must be guilty … of something.

The controversy began when the Border Patrol responded to a large influx of undocumented migrants in Del Rio, Texas, on Sept. 19. Officials ordered a mounted unit to an under-defended part of the border. Mounted units are commonly used by federal, state and local police agencies for crowd control. The agents found themselves facing a large group of Haitian migrants crossing the border, and they positioned themselves on the river’s edge to block entry.

A photographer captured the scene, which included agents using bridle reins to guide their skittish horses. While the entire videotape clearly shows the agents using the reins on their mounts, not on the migrants, some clearly misleading still shots appeared to make it look like the opposite was happening. Condemnations immediately erupted from politicians and pundits; some media reports presented the abuse allegations as fact — as the “whipping (of) Haitian asylum seekers.”

Rep. Maxine Waters (D-Calif.) declared that the alleged whipping was “worse than what we witnessed in slavery” and condemned “the cowboys who were running down Haitians and using their reins to whip them.” Senate Majority Leader Chuck Schumer (D-N.Y.) decried “images of inhumane treatment of Haitian migrants by Border Patrol — including the use of whips,” and Rep. Ayanna Pressley (D-Mass.) described the incident as “white supremacist behavior.”

For his part, President Biden rode the wave of media outrage, declaring: “It was horrible what — to see, as you saw — to see people treated like they did: horses nearly running them over and people being strapped. It’s outrageous. I promise you, those people will pay.”

Of course, the Soviet Union’s Beria was a model of efficiency compared to Biden’s Homeland Security secretary, Alejandro Mayorkas, who promised last September that the investigation would be “completed in a matter of days, not weeks.” Then months dragged on, and Mayorkas and his department went into virtual radio-silence.

The problem for Mayorkas was that the whipping story was not just false but was clearly false from the outset. The photographer who captured the images of the incident, Paul Ratje, stated within the first 24 hours that it was false and “nobody saw a Border Patrol agent whipping” migrants. That was obvious from the videotape, too.

However, the president, some congressional Democrats and many in the media had already adjudicated the case. The agents had to be guilty of something.

So, the agents wallowed in suspension for months. On the six-month anniversary of the incident, I wrote a column on President Biden’s “Red Queen Justice,” noting that the case followed a “classic response to such scandals [which] is to bury them in investigation to wait for public attention to wane.” I noted that officials also could avoid responsibility “by changing the question. For example, what began as an investigation into whether agents used reins to whip migrants might be converted into a long investigation into the use of horses in crowd control operations. That will take a lot of time and, when the report is issued, the actual whipping allegation can be buried in a broader policy debate. That will allow the media, as well as the administration, to focus on the policy as opposed to the personnel involved.”

If the Fox News report is true, however, the border agents may be found guilty of still unknown administrative offenses.

For many in Washington, the important thing would be that the agents are found guilty of something — anything.

It is all reminiscent of how President Biden rushed to public judgment about the fatal shooting of two men and the wounding of a third during riots in Kenosha, Wis., in August 2020. At the time, Biden strongly implied that accused shooter Kyle Rittenhouse was a “white supremacist” despite no evidence supporting that claim. Even after many accusations about Rittenhouse were debunked and a jury acquitted him of all criminal charges, Biden said publicly that the verdict left “many Americans feeling angry and concerned, myself included.”

Similarly, after protests in Washington’s Lafayette Park in June 2020, Biden repeated a now-debunked claim that the park was cleared with teargas to enable a photo op for then-President Trump, an allegation that falsely impugned the integrity of then-Attorney General Bill Barr. From the outset, there was ample evidence undermining that claim, but neither Biden nor many in the media waited for an investigation to establish the facts. Later, the Justice Department’s inspector general disproved the claim.

Now, as with those previous debunked claims, Biden knows he will have a cooperative media that is unlikely to challenge his version of what the Border Patrol agents did — because they are equally invested in the earlier, inaccurate condemnation of the border agents’ actions.

In announcing the agents would be punished before an investigation had even begun, Biden — like Alice in Wonderland’s Red Queen — insisted on “Sentence first — verdict afterwards.” The agents likely do not hold out much hope, given how there has been little acknowledgment, let alone an apology, from the president, who remained silent for months after his original claim was debunked.  They will finally have the verdict to go with the sentence . . . the offense, of course, to be named.