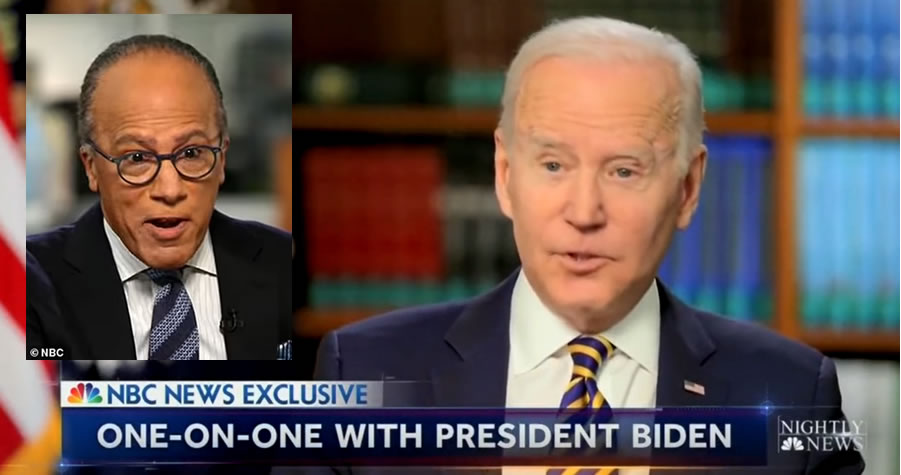 President Joe Biden called Lester Holt a ‘wise guy’ during a TV interview on Thursday after the NBC News anchor asked him for his definition of ‘temporary’ on the day inflation showed no sign of slowing and instead hit a 40-year high.

The White House has insisted that spiralling prices are ‘transitory’ and will begin coming down as pandemic supply chain pressures ease.

But on Thursday, the Labor Department reported that year-on-year inflation hit 7.5 percent in January – its highest level since 1982.

‘I think it was back in July, you said inflation was going to be temporary,’ said Holt.

‘I think a lot of Americans are wondering what your definition of temporary is.’

Biden smiled as he pushed back: ‘Well, you’re being a wise guy with me a little bit.

‘I understand, that’s your job.’

The issue has sent Biden’s approval ratings plunging and previous efforts to dismiss increases as temporary led critics to accuse him of being out of touch.

During the interview, which will be broadcast in full before Sunday’s Super Bowl, Biden tried to explain what was happening.

‘The reason for inflation is the supply chains were cut off, meaning that the products – for example, automobiles, the lack of computer chips to be able to build those automobiles so they could function … they need those computer chips that were not available,’ he said.

‘So what happens with the number of cars were reduced the new cars reduced it but made up at one third the cost of inflation because the price of automobiles are up.

He added that he had worked with Intel so that more chips were made in the U.S.

Holt pushed him to explain when Americans could expect some relief.

‘According to Nobel laureates – 14 of them that contacted me – and a number of corporate leaders it ought to be able to start to taper off as we go through this year,’ he said.

Even so, the numbers will add to gloom among Democrats ahead of this year’s midterms.