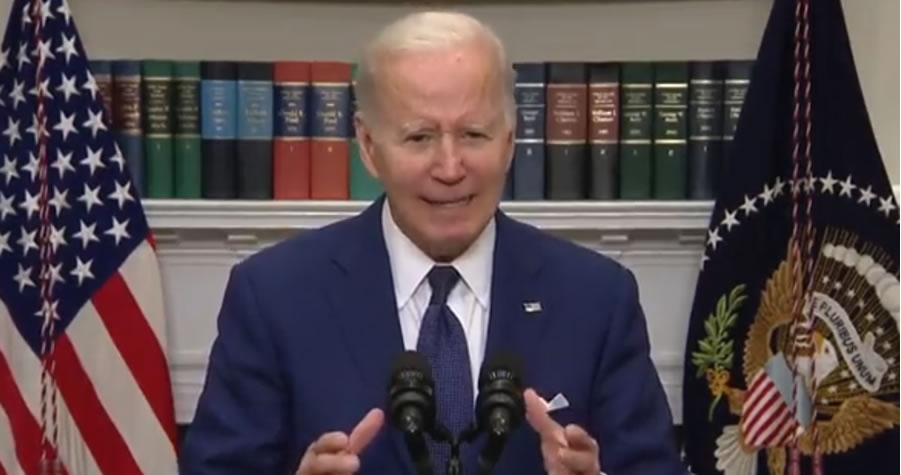 Joe Biden is a lot of things, but chief among them he is a liar. His administration routinely lies and attempts to mislead the public about all types of issues, but especially economic issues. Whether it is claiming the creation of “new” jobs when in reality they were jobs temporarily shut down by Covid measures, or claiming that Putin’s war is to blame for gas prices which were rising before it even started.

Friday, however, Biden may have made one of his boldest lies yet.

Biden claimed at a White House address that the average American household has lowered their debt level while increasing their savings since he took to the White House in January 2021.

“Today, thanks to the economic plan and the vaccination plan that my administration put into action, America has achieved the most robust recovery in modern history just two years removed from the worst economic crisis since the Great Depression,” he falsely claimed.

“Since I took office, families are carrying less debt; their average savings are up,”

None of that actually rings true. US savings are, as of April, at a mere 4.4%, marking the lowest point since September of 2008, during the Global Financial Crisis which decimated the world’s economy. Such a sharp and severe drop in the savings rate means that continued spending is unsustainable, and is generally a warning of an economy about to crash.

Beyond that, debt is higher as well. Total debt is $1.7 trillion (yes, trillion) higher than at the onset of the COVID-19 pandemic, and from this time last year consumer credit card debt rose by $266 billion, while mortgages have gone up by $250 billion, and another $11 billion in auto payment debt has been accrued.

Not to even start on the inflation.

These are boldfaced lies by Joe Biden with nothing to back them up, meant to distract from the fact that this is the worst off the average American has been in over a decade.