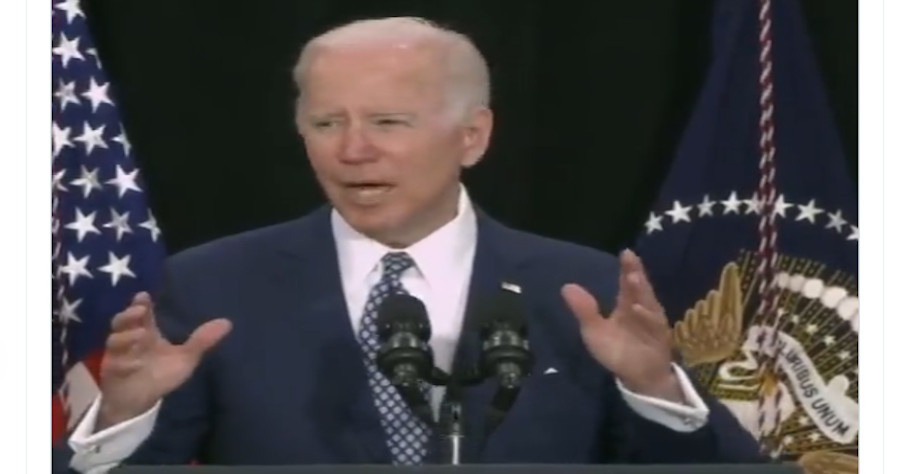 President Joe Biden traveled to Buffalo, New York on Tuesday in the aftermath of the shocking slaughter of ten people who were gunned down in cold blood at a local supermarket and, as many expected, he devoted much of his speech to painting his political adversaries as white supremacists and evildoers.

With masked-up first lady Jill Biden at his side, the demagogue in chief spoke in the divisive tones that have marked his time in office despite the campaign promises to unite the country and after invoking his dead son Beau and paying tribute to the victims, he got down to the business of politics.

“Jill and I bring you this message from deep in our nation’s soul: In America, evil will not win — I promise you. Hate will not prevail. And white supremacy will not have the last word,” Biden told the mournful crowd, as he suggested that the actions of one obviously disturbed individual who was indeed a racist were a sign that the phantom menace of white supremacy was the number one threat in America, a claim often repeated by him and other Democrats.

BIDEN IN BUFFALO: "In America, evil will not win, I promise you. Hate will not prevail. And white supremacy will not have the last word."pic.twitter.com/sHPmkyIP0u


Biden drew heavily on themes demonizing supporters of former President Donald J. Trump, the so-called ultra-MAGA Americans, and Republicans whom he has repeatedly smeared as racists, recently referring to them as the “most extreme” political organization in American history.

He also spoke of the Great Replacement Theory which has been rolled out by the left to bludgeon conservatives as well as a counter to Critical Race Theory which has fueled backlash against Democrats. Biden, like other party members, has blamed conservative media – particularly Tucker Carlson of Fox News who has been a fierce critic of the administration and leftists who are determined to have him taken off the air

“What happened here is simple and straightforward: terrorism. Terrorism. Domestic terrorism. Violence inflicted in the service of hate and a vicious thirst for power that defines one group of people being inherently inferior to any other group,” Biden said. “A hate that through the media and politics, the internet, has radicalized angry, alienated, lost, and isolated individuals into falsely believing that they will be replaced — that’s the word, ‘replaced’ — by the ‘other’ — by people who don’t look like them and who are therefore, in a perverse ideology that they possess and being fed, lesser beings.”

He later added, “You can’t prevent people from being radicalized to violence, but we can address the relentless exploitation of the internet to recruit and mobilize terrorism. We just need to have the courage to do that, to stand up,” seeming to suggest that government censorship is coming.

“Look, the American experiment in democracy is in a danger like it hasn’t been in my lifetime,” Biden said.

“It’s in danger this hour. Hate and fear are being given too much oxygen by those who pretend to love America but who don’t understand America,” he continued, in strong words that some might suggest are hollow and opportunistic considering his lack of interest in visiting Waukesha, Wisconsin last year after a racist black supremacist’s act of domestic terrorism when he drove his speeding vehicle through a crowd at a holiday parade, killing six people and injuring over 60 others.

Biden also took to Twitter to continue his attacks on conservative media.

We have to refuse to live in a country where Black people grocery shopping can be gunned down by weapons of war deployed in a racist cause.

We have to refuse to live in a country where fear and lies are packaged for power and for profit.


“We must all enlist in this great cause of America,” he added. “This is work that requires all of us — presidents and politicians, commentators, citizens. None of us can stay in the sidelines.”

However, Biden did not make similar remarks nor take a highly publicized trip to honor the victims last year when another crazed gunman, 21-year-old Ahmad Al Aliwi Al-Issa opened fire inside of a crowded grocery store in Boulder, Colorado, also killing ten innocent people who, like those who were murdered at the Waukesha Christmas parade, apparently weren’t worthy of a presidential visit because there was little to be gained politically.

Twitter users weighed in on Biden’s trip to Buffalo, one that had no intention of being a call to heal divisions in America, especially racial ones which continue to be exploited by a dangerously cynical political party determined to use any means necessary to stay in power regardless of the damage to the nation.

Just a reminder @JoeBiden refused to go to Waukesha to console the 50 plus families who lost loved ones and had others injured by a black nationalist terrorist using an SUV as a weapon. #Buffalo

All lives don't matter to Democrats. That's why Biden did not visit Waukesha. #buffalo

Did Biden go to Buffalo to incite a racial riot? His speech sounded like his was unifying BLM.