Joe Biden: “WE are in the process of making up MY mind” on Removing Tariffs on China [VIDEO] 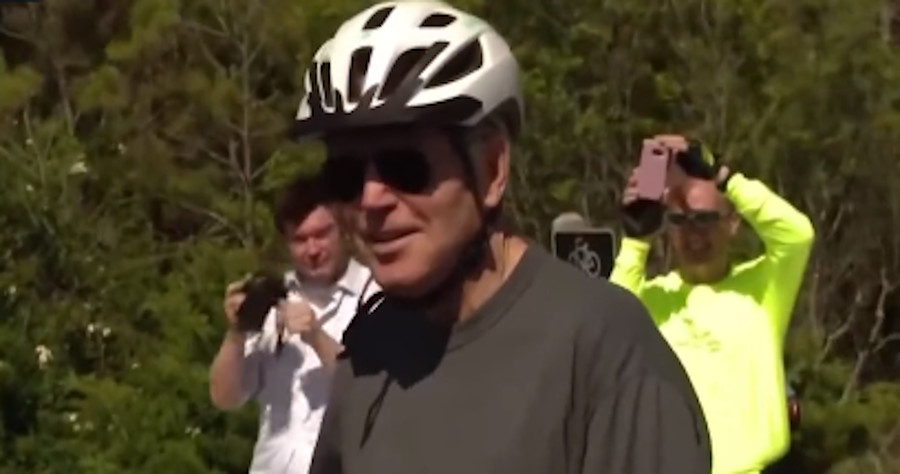 On Sunday, during a PR stunt that took a really bad turn, Joe Biden was supposed to ride his bike up on a small group of cheering supporters in Delaware, but instead, he did a face plant on the road in front of them.

Biden falls while stationary… Seems they tried to do a quick photo op and homie collapsed anyway. pic.twitter.com/lJdEVtpM4b

Of course, for the most part, the mainstream media ignored Joe’s fall, except those in the fake news media, who blamed the bike for Joe’s fall.

Although Joe and his enabling wife Jill spend almost every weekend in Delaware, when Joe was asked a question about an upcoming meeting with China President Xi, he told them he wouldn’t speak with them while he was on vacation.

Reporter: Mr. President, will you talk to President Xi soon?

Biden: I will not talk to you when I’m on my vacation—Yes, I’m going to be talking with him.

REPORTER: “Mr. President, will you talk to President Xi soon?”

BIDEN: “I will not talk to you! I’m on my vacation…Yes, I’m going to be talking to him.” pic.twitter.com/FifEdlKSk9

Although his staff is forced to work overtime to keep him from speaking to the media, it doesn’t usually take much to get Joe to spill the truth about what’s going on behind the curtain when he’s not being dragged away from them by members of his staff or his enabling wife, Jill Biden.

Watch Joe explain to a reporter how “we” haven’t made up “my” mind yet if his regime with lift the sanctions placed on China by President Trump:

Biden: “WE are in the process of making up MY mind.” pic.twitter.com/A95B7gz0cq

Reporter: How soon are you talking to Xi?

Joe: I ain’t telling you.

Reporter: Have you made up your mind on China tariffs, sir?

Joe: Uh, we’re are in the process of doing that.

Joe: Uh, WE’RE in the process of making up MY mind.