Biden: ‘This Isn’t About Taking Away Anyone’s Rights…We Need to Ban Assault Weapons and High-Capacity Magazines’ 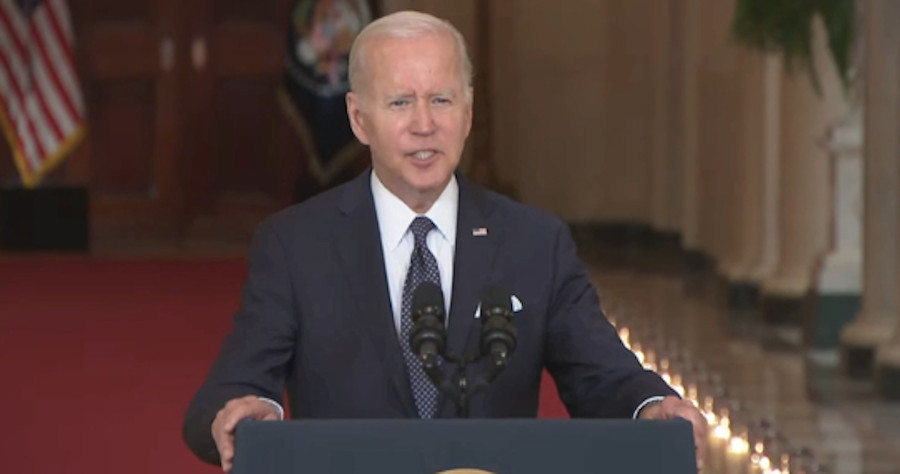 “Enough, enough,” President Biden said repeatedly Thursday night, as he delayed his beach-getaway to deliver a speech condemning the recent horrific violence perpetrated by disturbed and broken people who reach for guns to express their turmoil.

In a rare conciliatory comment, Biden said he didn’t want to “vilify” most gun owners, nor does he want to take away “anyone’s guns.” But a few sentences later, he called for “limitations,” including a ban on “assault” weapons and “high capacity magazines.”

Here are those two sections of his speech:

“The issue we face is one of conscience and common sense.

“For so many of you at home, I want to be very clear: This is not about taking away anyone’s guns.  It’s about vili- — not about vilifying gum [sic] — gun owners.

“In fact, we believe we should be treating responsible gun owners as an example of how every gun owner should behave.  I respect the culture and the tradition and the concerns of lawful gun owners.

“There have always been limitations on what weapons you can own in America.  For example, machine guns have been federally regulated for nearly 90 years.  And this is still a free country…”

“We need to ban assault weapons and high-capacity magazines.  And if we can’t ban assault weapons, then we should raise the age to purchase them from 18 to 21. Strengthen background checks. Enact safe storage laws and red-flag laws. Repeal the immunity that protects gun manufacturers from liability. Address the mental health crisis deepening the trauma of gun violence and as a consequence of that violence.

“These are rational, commonsense measures. And here’s what it all means.  It all means this: We should reinstate the assault weapons ban and high-capacity magazines that we passed in 1994 with bipartisan support in Congress and the support of law enforcement.

“Nine categories of semi-automatic weapons were included in that ban, like AK-47s and AR-15s.”

Also on Thursday, the House Judiciary Committee passed and sent to the full House the “Protect Our Kids Act.”

According to the Committee’s Democrat majority, the legislation would:

— Raise the lawful age to purchase a semiautomatic center-fire rifle from 18 to 21 years old.

— Establish a new federal offense for the import, sale, manufacture, transfer, or possession of a large capacity magazines, with exceptions for certain law enforcement uses and the possession (but not sale) of grandfathered magazines.

— Establish new federal offenses for gun trafficking and straw purchasers and authorize seizure of the property and proceeds of the offense.

— Establish requirements to regulate the storage of firearms on residential premises; create criminal penalties for violation of the requirements.

— Build on ATF’s regulatory bump stock ban by listing bump stocks under the National Firearms Act (like machineguns) and statutorily banning the manufacture, sale, or possession of bump stocks for civilian use.

The full House is expected to vote on the bill next week.

As Biden spoke and the Judiciary Committee voted, a bipartisan group of senators continued discussions on what Sen. Chris Murphy (D-Conn.) calls “a small step forward” to save lives.

In a June 2 op-ed for FoxNews.com, Murphy acknowledged “that in order to find common ground, I will need to agree to a smaller set of reforms than I would prefer.

“I’m willing to pass incremental change, like tightening up our background checks system and helping states pass laws to allow law enforcement to temporarily take guns away from individuals who pose a threat to themselves or others.