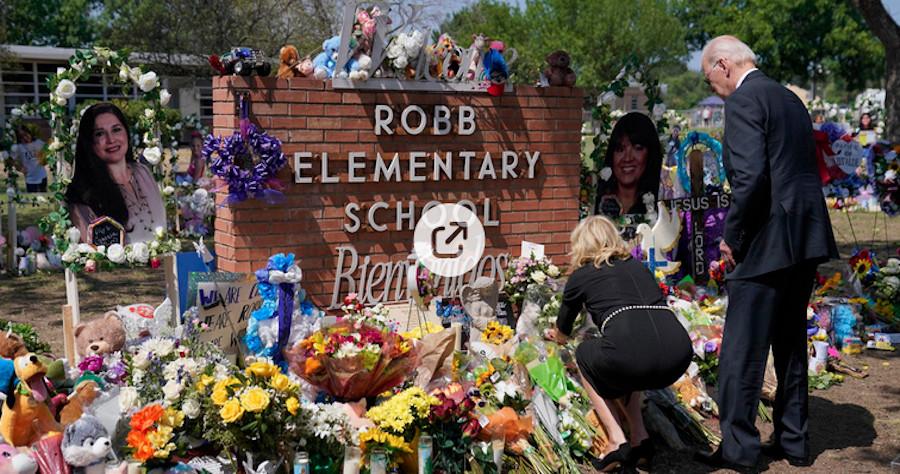 Biden administration officials uninvited many of the Border Patrol agents and other law enforcement officers who responded to the Robb Elementary School shooting from a meeting with the president scheduled for Sunday in Uvalde. Despite the event being planned for a large open-space facility, administration officials cited space as a reason for the retracted invitations.

Law Enforcement officers who responded to the Uvalde school shooting at Robb Elementary School on Tuesday morning received an invitation to meet with President Biden during his planned visit to Uvalde on Sunday afternoon. According to a senior Customs and Border Protection source, the officers received the invitation late last week. Many had accepted and were scheduled to attend the private address from the president. Most are now being informed they are no longer invited.

The meeting, specifically to address the law enforcement officers who responded to the shooting is part of President Biden and First Lady Jill Biden’s visit to Uvalde to address the families of the victims of last week’s school shooting at Robb Elementary.

In addition to Border Patrol BORTAC tactical unit members who killed the shooter after entering the classroom, others assisted with removing students and teachers from harm’s way. They also provided emergency medical attention to the survivors of the brutal attack. The source says the limitations likely apply to other large law enforcement agencies such as the Texas Department of Public Safety Highway Patrol which participated in the active shooter response as well.

The source says deciding which officers will be allowed to attend on such short notice will be difficult.

“These agents are still traumatized by the incident; the venue is large, and they are not going to buy this excuse,” the source told Breitbart Texas.

The source says mid-level managers from the Border Patrol were tasked to decide who will attend and feels those left out will assume their role in the event was unimportant. “It appears now as if this planned meeting was nothing more than a photo opportunity with the law enforcement community,” the source says.

Randy Clark is a 32-year veteran of the United States Border Patrol.  Prior to his retirement, he served as the Division Chief for Law Enforcement Operations, directing operations for nine Border Patrol Stations within the Del Rio, Texas, Sector. Follow him on Twitter @RandyClarkBBTX.