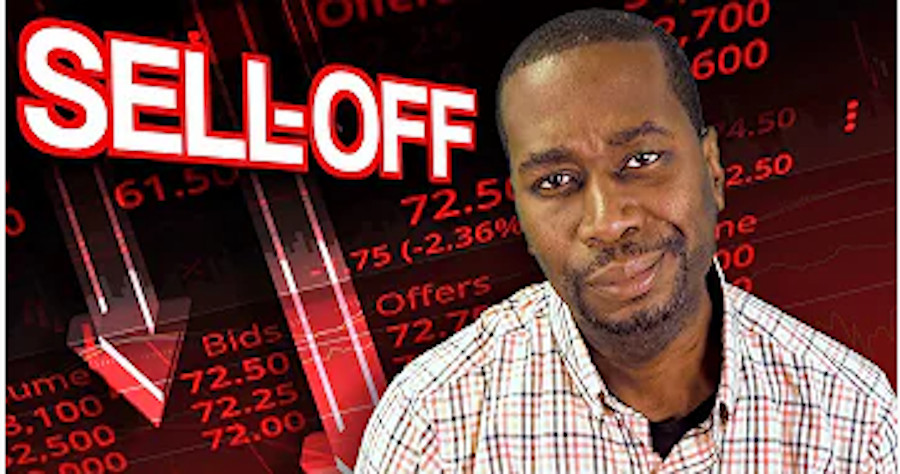 The Dow Jones Industrial Average tumbled below the key 30,000 level on Thursday as investors worried the Federal Reserve’s more aggressive approach toward inflation would bring the economy into a recession.

The Dow had rallied on Wednesday after the Fed announced its largest rate hike since 1994, but reversed those gains and then some on Thursday, tumbling to the lowest level since January 2021.

The major averages entered Thursday’s session down 4.7%, 6% and 6%, respectively, for the week and well below record levels. 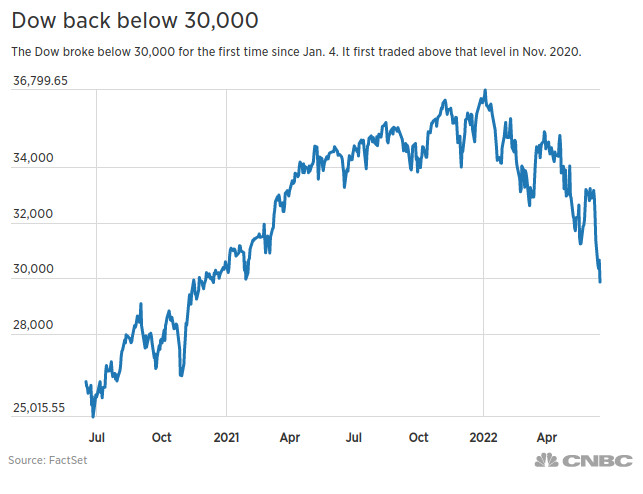 The S&P 500 and Nasdaq Composite are both in bear market territory, down roughly 23% and 34% from their all-time highs in January and November, respectively. The Dow, meanwhile, is about 19% below its Jan. 5 all-time intraday high.

“The Fed has a very tight needle to thread here and I think investors and the market, in general, are losing a good deal of confidence that the Fed might be able to do that,” said Ryan Detrick, chief market strategist at LPL Financial. “The truth is, the Fed is probably behind the eight ball. They should have been hiking more aggressively — probably starting late last year looking back — and the market is realizing that.”

The Dow on Thursday traded below 30,000 for the first time since Jan. 4, 2021 after first breaking above that level for the first time in November 2020. That came as the emergence of Covid-19 vaccines and massive stimulus from the Fed fueled a broader market rally — led by tech shares — and took the major averages to then-record highs.

Breaking above the 30,000 mark put the Dow more than 60% above its pandemic closing low at the time. While 30,000 isn’t necessarily a technical level for the Dow, these round 1,000-point thresholds are seen by many on Wall Street as key psychological levels for the market.

Data out Thursday further indicated a dramatic slowdown in economic activity. Housing starts dropped 14% in May, topping the 2.6% decline expected by economists polled by Dow Jones. The Philadelphia Fed Business Index for June came in with a negative 3.3 reading, its first contraction since May 2020.

“There is an astonishing level of tech selling right now,” wrote CNBC’s Jim Cramer in a tweet Thursday. “It is breathtaking to watch as sellers are sending the best techs down gigantically at 5 a.m.”

Staples stocks, known for their steady cash flows that could hold up during recessions, traded into the green or near the flatline. Procter & Gamble gained 1.6%. Colgate-Palmolive and Walmart were slightly higher.

“It’s about time we exit this artificial world of predictable massive liquidity injections where everybody gets used to zero interest rates, where we do silly things whether it’s investing in parts of the market we shouldn’t be investing in or investing in the economy in ways that don’t make sense,” Allianz chief investment advisor Mohamed El-Erian told CNBC’s “Squawk Box” on Thursday. “We are exiting that regime and it’s going to be bumpy.”

Central banks including the Fed are behind in the fight against inflation and are undergoing “a great awakening,” he added.

Markets initially liked the Fed’s plan to hike interest rates by 75 basis points and the potential of additional hikes of a similar magnitude. The Dow and S&P 500 on Wednesday snapped a five-day losing streaks and ended the session higher. The 30-stock benchmark added about 304 points, or 1%, while the S&P 500 advanced 1.46%. The tech-heavy Nasdaq Composite was the relative outperformer, rising 2.5%.

Market sentiment appeared to sour once again Thursday as central banks around the globe adopted more aggressive policy stances and investors questioned whether the Fed can pull off a soft landing.

As stocks fell, the 10-year Treasury yield resumed its massive June run on Thursday and was last trading around 3.44% after ending May at 2.84%.

Rampant inflation, which is at the highest level in 40 years, has weighed on the major averages, as have fears around slowing economic growth and a possible recession.