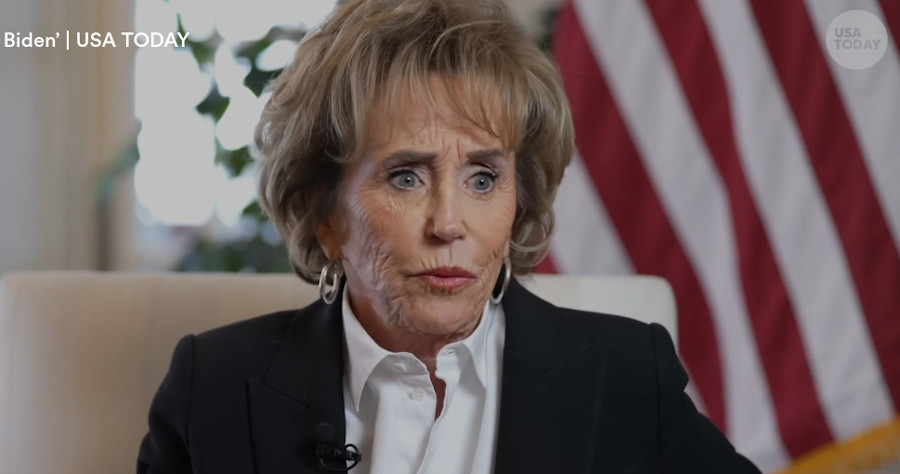 Valerie Biden Owens, President Joe Biden’s younger sister, did a promo piece for USA Today for her new book, “Growing Up Biden: A Memoir,” that portrays Hunter Biden as a victim, her brother as a hero, and blames everything on former President Trump’s “right-wing followers.”

When asked by USA Today if Hunter Biden is at least in some way responsible for scandals involving the laptop-from-hell and probable financial corruption, she simply replied, “No.”

“Hunter walked through hell. He didn’t wake up and say, ‘Aunt Val, I think I’m going to be an addict. And so whatever happens, it’s my responsibility,’” she asserted.

Instead, she lauded her nephew for having the “courage” and “strength” to fight his addictions.

So family family profiteering in millions from one of our enemies is not any big deal ? Wow are you biden swamp things clueless and its just a right wing thingy. Got news for you if your Pravda democratic news agency had done their job joe would not be president.

“Trump and his right-wing followers have continued to do whatever they can to discredit the family and therefore to bring Joe down,” she charged.

“My brother’s a stutterer, and he still stutters and tries to get things out,” she stated. “And what did really make me mad and drive me crazy was when he would go to speak, and there would be a hesitancy, and the critique from the bad guys, the right-wing, was that he’s not smart; he didn’t know what he was saying.”

She would defend those two scumbags. As dirty as it gets. They are all lying through their teeth. She’s right. Family family family. Just like the mob. She knows where all the skeletons are buried so she keeps her mouth shut and in turn she gets Chinese checks. Foul.

“When he calls, I don’t talk about what happened with Putin today,” she said in the interview with USA Today. “We talk about family. It’s a respite…”

The USA Today interview was held at the Biden Institute within the University of Delaware. Evidently, Biden’s sister was nervous during the interview and James Biden and his wife Sarah “unexpectedly” showed up to offer support off-camera.

The president’s sister embarked on her book tour Thursday prior to the release of her new memoir. She has been her brother’s longtime political confidante and has been his campaign manager for all seven of his previous Senate campaigns as well as advising him during his three presidential bids.

The book may run afoul of White House ethics policies that prohibit Biden’s family members from profiting off his position as president.
It is widely rumored that Hunter Biden is poised to be indicted on numerous counts connected to his finances and business dealings. Conservatives have been pressing for an in-depth investigation of his overseas financial ties ever since his laptop was left at a Delaware repair shop ahead of the 2020 presidential election.

Republican Sens. Chuck Grassley and Ron Johnson have been at the forefront in the Senate warning about Hunter Biden’s nefarious connections to the Chinese government.

“Hunter Biden and James Biden received millions of dollars from companies connected to the communist Chinese regime. But, frankly, it’s worse than that. These companies were effectively an arm of the Chinese Government,” Johnson declared on March 30. “This isn’t Russian disinformation. These are hard facts backed up by bank records of actual financial transactions that prove just how connected the Bidens were, and now how compromised President Biden probably is.”

The fact we have proven Joe Biden to be a liar, why would you believe anything he says on this subject at all? pic.twitter.com/mgWK10AxkX

The mainstream media is finally picking up on the story of Hunter Biden’s laptop. Both The New York Times and The Washington Post have authenticated thousands of emails originating from the laptop and CBS is covering them as well. This follows two years of censoring the story that was originally broken by the New York Post just before the 2020 presidential election.

A federal investigation into Hunter Biden began in 2018 and many believe it is about to culminate in an indictment as the U.S. Attorney’s Office in Delaware seeks grand jury testimony concerning the sources of his foreign income.