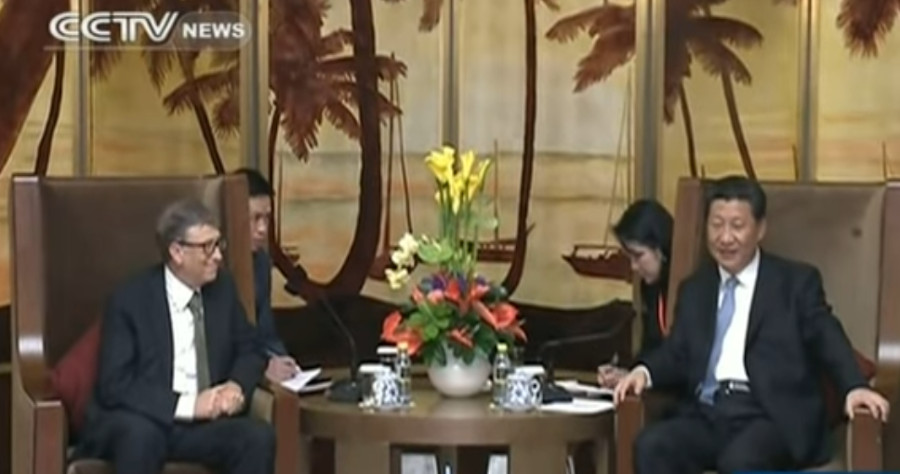 ill Gates is one of the world’s richest men, rightly recognized as a visionary who helped build a massive technology industry. He has moved into the world of philanthropy to pursue support for some notable causes. He also has a deeply troubling relationship with the Chinese regime.

No one can blame a corporate executive for being enticed by the Chinese market’s opportunities. From the earliest days of the internet, China, with approximately four times the population of the United States, has been seen as a lucrative market for the tech industry. You can bet Bill Gates saw it, too.

But Gates has cooperated with the regime in ways that other tech titans have not. He has lent credence to the claims of the Chinese Communist Party and been rewarded with access, favors, and titles. He has done the bidding of the regime in the tech world and has apologized or made excuses for its aberrant activities. On top of all that, he has invested in companies attached to Beijing’s military-industrial complex.

Microsoft founder has whitewashed Chinese censorship of the internet and invested in industries essential to the Chinese military-industrial complex, from AI to nuclear power, according to new book.

Gates appears to have always underestimated the repressive nature of the CCP. His relentless techno-optimism has made him an easy mark. He has expressed naive attitudes about the role of technology in that repression. In 1995, at the dawn of the broader internet age, he suggested that Chinese efforts to censor the web would fail. Gates claimed that Chinese officials would literally need to have someone looking over everyone’s shoulder to implement full internet access and maintain censorship.

Of course, Beijing had a censorship system in place just two years later. Even after China erected what came to be known as the “Great Firewall,” Gates still insisted that censorship was too hard to erect and would not work. In 2008, he told students at Stanford University: “I don’t see any risk in the world at large that someone will restrict free content flow on the internet,” he told them. “You cannot control the internet.”

It was a bold statement that proved both inaccurate and disingenuous. At that point, Microsoft had already been helping the regime censor content for several years.

In June 2005, Microsoft launched a blogging software program called MSN Spaces in China, just as blogging was taking off. But the program censored words including “democracy,” “human rights,” and “freedom of expression.” If you typed in those words or phrases, the blogger would receive an error message. The system also blocked or limited results of searches for specific names or phrases like “Tibet independence,” “Falun Gong,” and “Tiananmen Square.” On December 30, 2005, when a Chinese blogger and journalist named Zhao Jing criticized the censorship on his MSN Spaces blog, Microsoft shut him down, “following a request from Chinese authorities,” according to Amnesty International. The problem extends even to today.

In early June 2021, users of Microsoft’s Bing search engine in the United States, Europe, and Asia reported that they could not pull up images and information concerning the anniversary of the Tiananmen Square massacre on their laptops. Microsoft blamed it on “human error,” but did not specify what error would have caused images of “tank man” and others to disappear.

The controversy over the regime’s censorship on the internet finally boiled over in 2010, when Google went to battle over search engine restrictions. When the dispute became public, Gates actually sided with Beijing and against Google, arguing that companies need to follow local laws. His position even prompted the Chinese embassy to run an approving story titled “Bill Gates Bats for China.”

Gates tried to sound principled, but this simply did not conform to the realities of his participation in censorship. In 2010, he claimed that China’s restrictions were minimal and expressed confidence that technology would overcome it. “Chinese efforts to censor the internet have been very limited,” he said. “It’s easy to go around it, so I think keeping the internet thriving there is very important.”

Steve Ballmer, the Microsoft CEO at the time, echoed that sentiment. “If the Chinese government gives us proper legal notice, we’ll take that piece of information out of the Bing search engine.” Ballmer added that countries like the United States with “extreme” free speech laws also censor some material.

While Gates was attempting to explain away Chinese censorship, he was actively helping the regime accomplish it. Meanwhile, he was critical of any censorship in the United States. Gates was quick to criticize efforts he saw to restrict internet access unnecessarily. One example was his view of legislation that would curb children’s access to pornography. As Gates put it:

“Microsoft and others in industry and non-profit organizations were deeply involved in trying to block language that would put chilling restrictions on the use of the Internet for the free publication of information. The language, ostensibly aimed at keeping pornography out of the hands of children, goes much too far in restricting freedom of expression. … Let’s not undermine the world-wide trend toward free expression by setting a bad example when it comes to free speech on a computer network.”

Clearly, Gates did not want children to have easy access to pornography. Yet, while the vagueness of language concerning that law bothered him, China’s censorship apparently did not, given his frequent defense of it.

Beyond the issue of apologizing for Beijing’s censorship, Gates continued to appease the Chinese government. Microsoft promised Beijing that it would begin outsourcing jobs from the United States to China — it was an explicit promise. By the early 2000s, Microsoft was on track to have outsourced a thousand jobs. When the Chinese government criticized the company for not keeping pace, Microsoft said they would work harder to ship more jobs more quickly to the Chinese mainland.

Gates’ efforts to support the regime’s policies have been rewarded over the years. In 2006, the state-run People’s Daily Online named Gates among “50 foreigners shaping China’s modern development.” Joining him on the list were Karl Marx, Vladimir Lenin, Albert Einstein, Charles Darwin, and Joseph Stalin. Gates was the only person from the world of technology on the list. Earlier that year, when Chinese president Hu Jintao made his first official visit to the United States, he stopped in Seattle for a visit with Gates at his “palatial home” before heading to Washington, D.C. ABC News declared, “Chinese President Meets Bill Gates First.”

The relationship between Microsoft and Beijing improved. By 2010, Microsoft had taken another step in its tightening association with the Chinese government. The company set up a research laboratory in China to work on artificial intelligence (AI) with a Chinese military university, an essential area of research that would have huge implications for the economy and on the battlefield. Microsoft even started taking in interns from the People’s Liberation Army at its Asian research facility.

Microsoft worked with the Beijing regime in other ways. The company allowed the PLA to access communications on Skype, the company’s online videoconferencing platform. Communist officials were monitoring chats that might include organizing protests or other activities that might displease the regime. When asked about it, Microsoft simply said, “Skype’s mission is to break down barriers to communications and enable conversations worldwide.”

Microsoft later formed a partnership with the state-owned military conglomerate China Electronics Technology Group (CETC) to make Windows available to government officials in Beijing. The agreement would provide “operating system technology and services for Chinese users in specialized fields in government institutions and critical infrastructure state-owned enterprises.” The decision by Microsoft to work with CETC raised plenty of eyebrows in the tech world. As Computerworld noted, “CETC manages scores of research institutes and more than 180 commercial subsidiaries, most of them involved in defense-related research and development, the production of defense and dual-use electronics, or supplying the People’s Liberation Army (PLA) and government agencies and state-run companies with technology products.” CETC’s labs designed the electronic guts for China’s first nuclear bomb, as well as its guided missiles and satellites. There are “very blurred lines” between what is civilian and military at CETC, the publication noted. The specifics of the deal were mysterious. Microsoft said that it made “changes” to Windows for the Chinese government but would not explain what they were.

Gates’ budding relationship with the Chinese government opened the door to other opportunities. In 2014, when Gates stepped down as chairman of Microsoft, he remained on the board as a technical advisor. He wanted to spend time on his nonprofit foundation, but it is clear that he still had other interests related to technology. With a fascination with nuclear power, he had cofounded a company called TerraPower in 2008, with hopes to build nuclear reactors in China. He started working with Beijing on a project in 2011.