Bill Maher: ‘If Putin Thought Trump Was Really That Supportive’ Then ‘Why Didn’t He Invade When Trump Was in Office?’ [VIDEO] 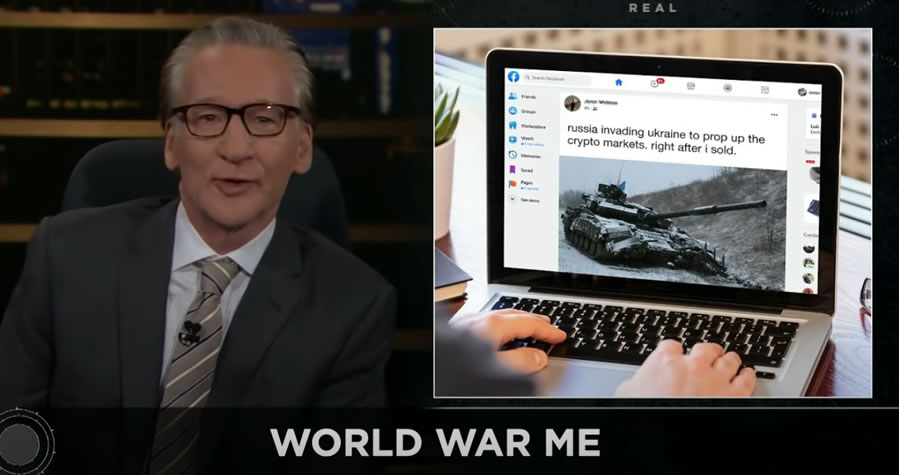 On Friday’s broadcast of HBO’s “Real Time,” host Bill Maher criticized people who have attempted to make the Russian invasion of Ukraine about their pet issues and criticized those who have attempted to blame the invasion on former President Donald Trump by asking, “if Putin thought Trump was really that supportive of him, why didn’t he invade when Trump was in office?” And arguing that the question’s worth asking “if you’re not locked into one, intransigent thought.”

Maher began his closing monologue by stating, “Watching the reactions to war in Ukraine these past few weeks, it’s become obvious that America in this age suffers acutely from a particular disease of the mind, which is: everything proves what we already believed, and everything goes back to the thing we already hate. … So, naturally, Republicans blamed Ukraine on Biden being the worst president ever, and Democrats blamed it on Trump’s being the worst president ever, which he was, there is that.”

He added, “[I]f Putin thought Trump was really that supportive of him, why didn’t he invade when Trump was in office? It’s at least worth asking that question if you’re not locked into one, intransigent thought.”

Maher also criticized former President Donald Trump for saying the invasion was about the “rigged” 2020 election and attempts to bring issues like race, American self-loathing, LGBTQ rights, and cancel culture into the discussion on Ukraine.

Maher concluded, “Ukraine is not mostly about your pet grievances. It’s about Vladimir Putin’s, and Putin is bad, very, very, very bad.”