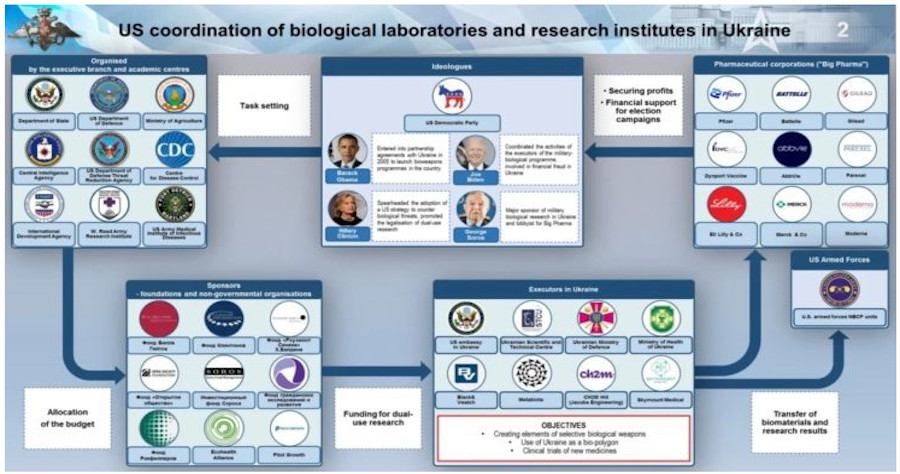 It always comes back to Soros. According to a Russian military claim, US military biological research in Ukraine is largely being headed by US Democrats. These bioresearch labs in the war torn country are set up by Democrat partnered pharmaceutical companies, as well as foundations led by the sinister George Soros and the ghoulish Bill Gates–as well as top Democrats.

From the Gateway Pundit:

According to RT, the US government set up a way to fund the military bio-research directly from the federal budget, but also used government guarantees to raise funds from “non-governmental organizations controlled by the leadership of the Democratic Party,” Kirillov said.

All of these globalists allegedly have a hand in this cycle of shady election money generation from Ukrainian biolabs. But that’s not all.

The Russian Defense Ministry spox also named Pfizer, Moderna, Merck and Gilead as involved in this scheme, “using it to test medications while bypassing international safety standards”, according to RT. In return, Big Pharma donates to the  Democratic Party, Kirillov claimed.

Big Pharma, including companies producing the jab, have been bypassing safety standards in exchange for giving a kickback to the Democratic party. But sadly, this is not just a US Democrat phenomenon.

Nevertheless, the globalist group of Soros, Gates, the Bidens and Clintons, and Big Pharma are all actively engaging in suspect activity by setting up military bioresearch in Ukraine with federal money, bypassing international safety laws, and sending money raised from the research, especially by Big Pharma, back to support Democrat election efforts.

The corruption of this cabal runs deep, and it certainly explains why globalists are so desperately trying to support Ukraine by any means necessary. Soros, especially, has been outspoken since day one of the invasion about ways that NATO and the EU could safeguard Ukraine, presumably to keep his investments in bioresearch secure.

The question now is what consequences will there be for this behavior? Likely none, as the Democratic regime will claim Russian disinformation as they always do, as was the case for Hunter Biden’s since-vindicated laptop.