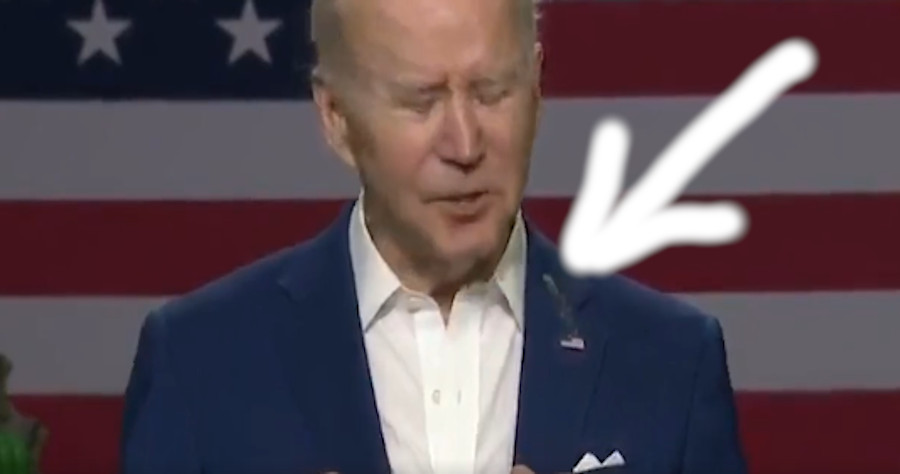 The nation’s ‘Liar-In-Chief’ received harsh commentary from a bird trapped in the barn where his current spate of lies were being voiced.

One used to call ‘Bullsh*t’ when forced to listen to lies. But the poor bird dispatched his best bull imitation on the man who blames Putin for that which is clearly his own fault. “Birdsh*t”

It was one for the birds.

Did a bird just poop on Biden? 😂

At least it seemed that way, as the somewhat hapless commander-in-chief gave what was meant to be a rousing speech and pep rally in Iowa on Tuesday.

It was difficult to miss what appeared to be the projectile of avian fecal matter that scored a direct hit on the president’s left lapel. Although, after much mockery, the White House has given clarification on the supposed flying mystery substance that many aren’t buying.

It was a rare moment of levity in what was otherwise an unremarkable 25-minute speech, the gist of which was to place the blame for the country’s record 8.5% annual inflation rate in March squarely on the shoulders of Vladimir Putin. Trotting out the supremely unoriginal “#PutinPriceHike” line, the White House has taken to accusing the Russian president of driving up prices worldwide with his invasion of Ukraine.

At no point did the president acknowledge that his many policy errors and economic missteps might bear a greater responsibility for domestic economic woes than foreign wars.

“I’m here today to talk about what we’re doing to lower costs for American families and put rural America at the center of our efforts to build a future that’s made in America,” Biden declared confidently, unaware of what was coming. “That’s not hyperbole!”

Neither was the unseemly ornament that one apparently unenthusiastic avian spectator left on the president’s suit. Characteristically, Biden seemed oblivious to what had happened and blithely continued with his speech, which took place inside a barn in Menlo, Iowa. As some Twitter users pointed out, Biden’s speech also used a gigantic pile of cornmeal as a prop, which many birds just happen to love.
The speech was part of a larger campaign by the White House to tout a new rule change for the Environmental Protection Agency. As of June 1, the agency will now allow gas to contain 15% ethanol, which is a change from the previous limit of 10% designed to reduce smog. This comes amid Tuesday’s report that inflation has reached levels not seen in 40 years, which the president of course blamed on geopolitical upheavals and the Ukraine war, despite the fact that inflation had been trending higher since Biden took office.

The bird in the barn, it seems, wasn’t having any of it. And its reaction to Biden’s speech is pretty much in accordance with the views of many Americans. A recent CBS News/YouGov poll indicates that only 42% of the country has a favorable view of Biden’s overall job performance. That’s a 20% drop compared to what people thought of the president just one year ago. And when it comes to inflation, 69% of the respondents disapprove of Biden’s handling of the issue.

After his speech, Biden spent some time mingling and conversing with some of the attendees—but they either didn’t notice his new lapel “pin,” or they were discreet enough not to mention it. But if White House Communications Director Kate Bedingfield is to be believed, that’s because there was no “there” there: it was just a splatter of corn.

Needless to say, many folks on Twitter weren’t having it:

I’ve lived in farm county my entire life , I’m 58. Never had corn fall from the sky , and then melt in. Just another lie.

Just gotta say, Biden’s ethanol announcement featured the best prop I’ve ever seen at one of these speeches. Good job @whitehouse advance team and thank you for your service @ giant pile of cornmeal pic.twitter.com/MJsM5irIew