#BlackfaceHitler Trends As Justin Trudeau’s Government Cracks Down On Truckers 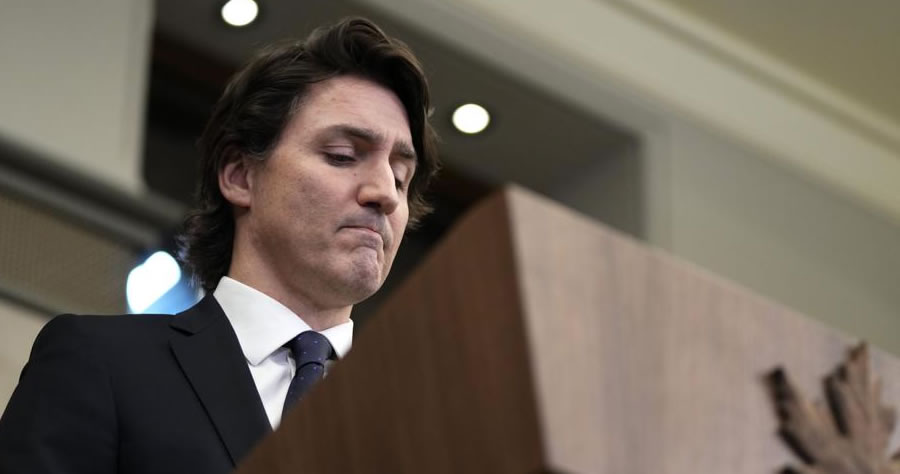 Canadian Prime Minister Justin Trudeau became the subject of an unflattering Twitter trend amid his continued crackdown on trucker protests.

“I don’t want to hear ONE MORE WORD from these ‘end of democracy’ Democrats until the White House denounces Trudeau and how he’s treating his peaceful protesters,” Florida congressional candidate Lavern Spicer tweeted.

Laurence Fox shared a quote from author George Orwell — “All tyrannies rule through fraud and force, but once the fraud is exposed they must rely exclusively on force” — and added, “I see that #BlackfaceHitler is trending. Good.”

I see that #BlackfaceHitler is trending.

This is what #BlackfaceHitler is scared of. Unity in the face of tyranny. God bless you 🇨🇦 #FreedomConvoy2022 pic.twitter.com/K75TjL3Rxr

I knew who #BlackfaceHitler was referring to before I even looked at the tag. pic.twitter.com/Uxba17XoVt

Trudeau, who was forced to apologize several years ago for wearing costumes that included blackface, drew several comparisons to Nazi dictator Adolph Hitler when he invoked emergency powers in order to crack down on the massive trucker protest known best as the Freedom Convoy.

Tesla and SpaceX founder Elon Musk tweeted — and then deleted amid backlash — a meme comparing Trudeau to Hitler, and Daily Wire editor emeritus Ben Shapiro responded on his show on Friday, explaining why the meme was not anti-semitic and why it might even have been an appropriate comparison:

This is frightening stuff. All of this should frighten you. So, but here’s the thing: what was the left all hot and bothered about yesterday? What the left was hot and bothered about was the fact that Elon Musk tweeted out an internet meme about Hitler. This is what the left was super worried about. So, just to get this straight, if a Black Lives Matter activist attempts to murder a Jew in Louisville, this is not antisemitism. Even if his page is loaded with antisemitism, not antisemitism. However, if Elon Musk makes a Hitler joke about a leader who has now invoked an emergencies act to freeze bank accounts and utilize dictatorial power, Elon Musk must be, secretly, a vicious antisemite.

And he tweeted out a meme of Hitler that said, ‘Stop comparing me to Justin Trudeau. I had a budget.’ OK, that’s a very old internet joke, right? What’s the difference between X politician and Hitler? Hitler had a mustache. Right? These are very old internet jokes. They’re not antisemitic. Ok, like, let me explain as a person who’s been attacked with, probably, more antisemitism than nearly anyone in American public life, I can safely say that is not an antisemitic meme.