‘Absolutely moronic’: We’re Not Halting Gas and Oil Purchases from Russia Because We’re Trying to Minimize ‘Pain to Us’ 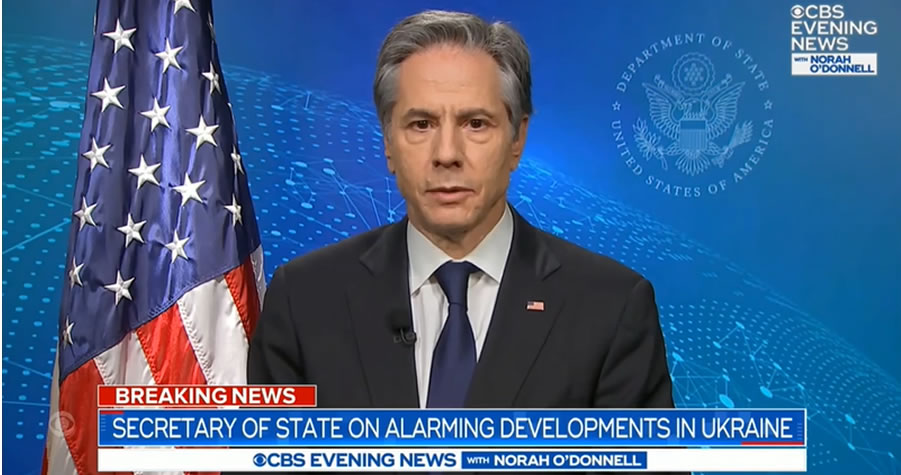 On Thursday’s broadcast of “CBS Evening News,” Secretary of State Antony Blinken responded to a question on whether the United States will cut off purchases of oil and gas from Russia over its invasion of Ukraine by stating that we’re trying to ensure “that we inflict maximum pain on Russia” while at the same time, “minimizing any of the pain to us.”

Host Norah O’Donnell asked, “Russia’s economy’s fueled by gas, and the U.S. is a consumer. So, would the U.S. consider cutting off oil and gas purchases from Russia?”

Blinken responded, “Well, what we’re doing, Norah, across the board, is making sure that we inflict maximum pain on Russia for what President Putin has done, while minimizing any of the pain to us.”

He also stated, “We’re in full coordination with other countries, both consumers and producers alike, to minimize any impact that this may have on energy prices and on gasoline.”

Reuters's @SteveHolland1: "Targeting the Russian energy industry is totally on the table? is that what you are saying, Daleep?

WH's Daleep Singh: "What I'm saying that our measures were not designed to disrupt–in any way–the current flow of energy from Russia to the world." pic.twitter.com/IqkxZTGaKp

White House: "Our sanctions are not designed to cause any disruption to the current flow of energy from Russia to the world."

Doubling down, Deputy National Security Advisor and Deputy NEC Director, Daleep Singh says "our measures were not designed to disrupt in any way the current flow of energy from Russia to the world."

What the hell kind of operation are you guys running there anyway?
What are sanctions and how do they work?

Biden refuses to sanction Putin where it would hurt — but political tribalists insist everyone “rally” around this. Absolutely moronic. https://t.co/qL9J5xx3ro