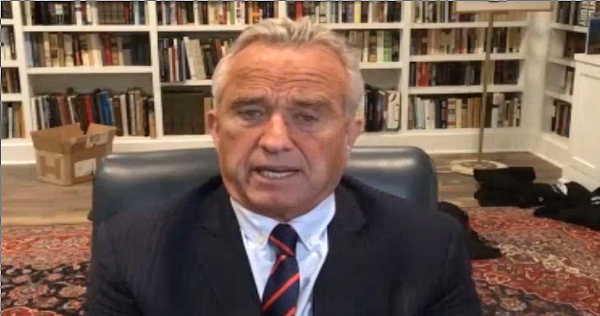 Dr Anthony Fauci has established himself as “not somebody who was, number one, working for public health. He has transformed that agency, during the 50-years that he’s been there, from a public health agency into an incubator for pharmaceutical products” according to an interview with the author of The Real Anthony Fauci: Bill Gates, Big Pharma, and the Global War on Democracy and Public Health, Robert F Kennedy, Jr.

Kennedy continues, “The entire regulatory purpose of NIH has been subsumed by the mercantile and commercial interest that he has been promoting for 50 years.”
Kennedy and his family have interacted with Dr Anthony Fauci for decades. The Kennedy family has been deeply enmeshed in public health for many years.

The late Senator Edward Kennedy was the Chairman of the Senate Health Committee for 15 years and basically wrote Fauci’s and Francis Collins’s budgets. Eunice Shriver was a principal of public health institutions. The Kennedy Krieger Institute and the Eunice Shriver Institute are named for family members.

Kennedy says, “All the metrics by which he judges his own success, by which people who work for him judge their success, have nothing to do with solving public health problems. They have to do with marketing and creating new pharmaceutical products. So between 2009 and 2016, FDA-approved 240 new drugs that came out of Tony Faucis’ shop. And with each of those drugs – many of them, he can personally keep patent rights to that. He seldom does that anymore.

He has profited and helped others profit from his position to the tune of billions.

He has the power to get new drugs approved because he controls the panel within the FDA that approves new drugs. Virtually everybody who are allowed to sit on those panels are people who his agency is giving grants to, year by year.

Fauci’s abuse of position and power is clearly presented in the interview and in greater detail in his book, which contains over 2200 documented citations.