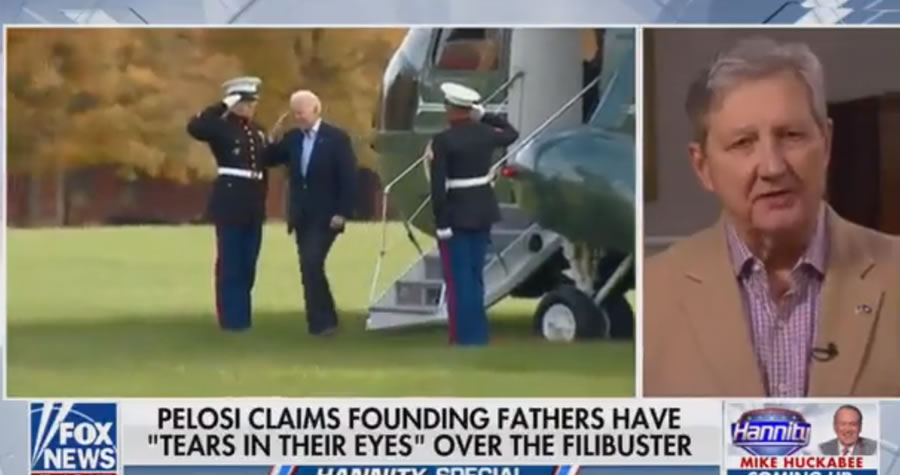 President Joe Biden had a terrible week last week, the vast majority of which he brought on himself not only thanks to his inability to bring his own party together but also because he exposed himself to a cross-section of voters across the country for who he truly is in that bitter, racially divisive speech he gave in Georgia.
And while this week is not off to a promising start for Biden either, it’s important to try and put all of this in perspective going into the 2022 midterms – with that perspective being that Joe Biden’s entire first year has been a dumpster fire of epic proportions, something that is reflected in his plummeting poll numbers.

I could list them out for you here, but it wouldn’t be nearly as entertaining as listening to Sen. John Kennedy (R-La.) do a rundown of the top Joe Biden failures during a recent interview he did with Fox News host Sean Hannity.

“If aliens landed tomorrow and said, ‘take me to your leader,’ it would be embarrassing,” Kennedy, who is famous for uttering such humourous quips during interviews, went on to say.

KENNEDY: "If aliens landed tomorrow and said 'take me to your leader,' it would be embarrassing." pic.twitter.com/7NvORBXtc4

Pres. Biden is wrong to say that tens of millions of Americans are racist because they don’t support his woke agenda.

The truth is that most Americans think more about character than race—They understand that souls have no color. pic.twitter.com/wQwl3mP6lt