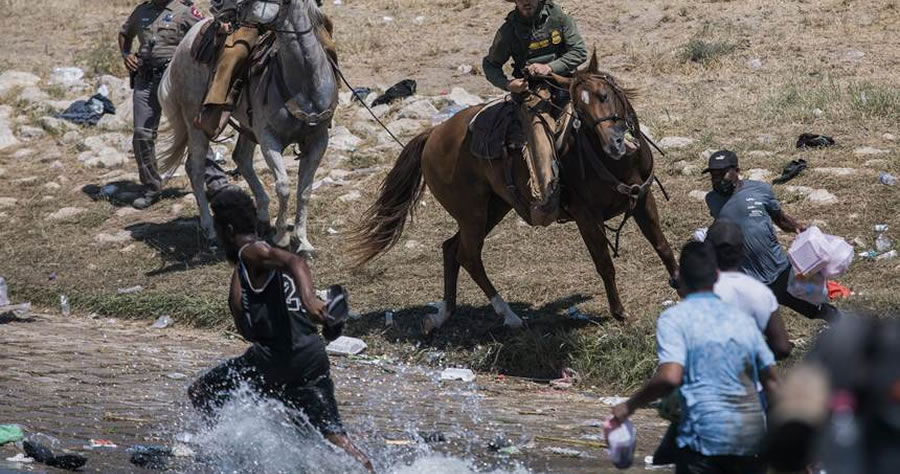 You’ll recall the incident that occurred last September at the US-Mexico border when photographers caught agents on horseback using their long reins to control their horses as they tried to slow the onslaught of migrants illegally crossing the Rio Grande river into our country.
The Biden administration immediately drew conclusions, saying the agents were “whipping” the migrants as if they were slaves. “To see people treated like they did, horses barely running over, people being strapped – it’s outrageous,” Joe Biden told reporters after the photographs surfaced. “I promise you, those people will pay.”

The controversy was quickly debunked, and the agents were cleared of wrongdoing. So, what’s the poor Biden Administration to do? Punish them for “administrative violations,” of course.

Fox News reported Tuesday that the Department of Homeland Security will discipline multiple horseback Border Patrol agents in the debunked “whipping” of Haitian migrants story. Already suffering from low morale due to record migrant surges at the US-Mexico border, agents are reportedly “furious” over the decision.

Why? Because they know they’re being made into scapegoats for the failed border policy of the Biden administration.

The Biden Administration is reportedly planning to punish the border agents accused of whipping migrants despite the debunked claims in that scandal. https://t.co/UzcBMJmFzy President Biden not only declared them guilty but pledged punishment before the start of the investigation

It’s hard to think of a more trumped-up charge than “administrative violations.” What, did they fail to sharpen their pencils to the required length?

What we’re seeing right now is the executive branch weaponizing the Office of Professional Responsibility to go after what President Biden perceives as political opponents. He doesn’t like the Border Patrol. He has never liked the mission of the Border Patrol. And now he is going after these agents because he panders to open border activists. This should never happen in this country.

He continued, explaining punishment was pre-ordained the second the most powerful man in the world demanded it:

They had no choice.

Border patrol agents deserve a president who will support them, not smear them — which is exactly what President Biden did when he promised, without knowing the facts, that agents would ‘pay’ for the false allegations of ‘whipping’ migrants.