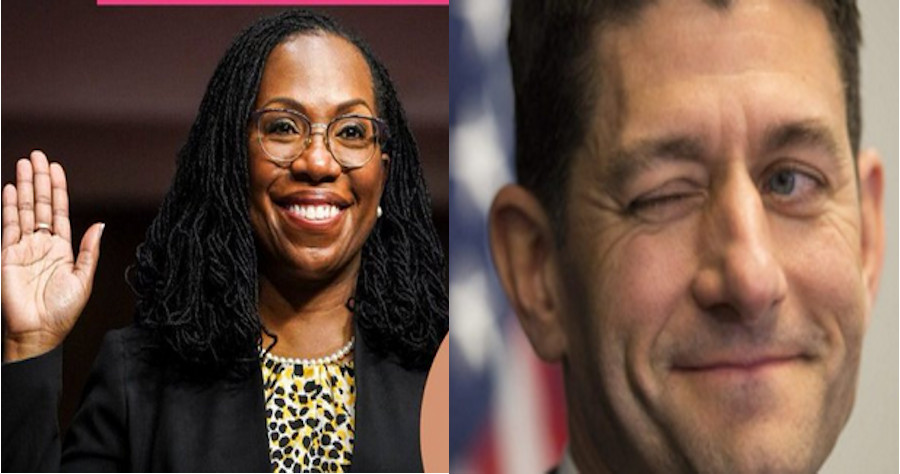 This morning, Joe Biden announced his nominee for the US Supreme Court Justice who will replace Justice Stephen Breyer.

Woke Joe promised to pick the next Supreme Court Justice based on their genitalia and the color of their skin.

Joe’s handlers chose today, to distract Americans from his disastrous handling of the full-scale war between our ally Ukraine and Russia, to announce that he’s chosen D.C. District Court Judge Ketanji Brown Jackson as his nominee.

By nominating Judge Ketanji Brown Jackson today, @potus kept his promise to Americans. A president must be able to multi-task, all the time. So don’t ask Black Women to wait any longer. We’ve waited over 200 years for this moment. The time is now. #SheWillRise #StandWithUkraine pic.twitter.com/ZDLfP7B7Ko

Much to the dismay of liberals, Judge Brown, who was confirmed on the DC District Court in February 2022, is married to the brother-in-law of former GOP Speaker of the House and Vice Presidential candidate Paul Ryan.

Liberals can take heart, however, as most Republicans don’t consider former Speaker Paul Ryan one of them anymore.

She’s married to Paul Ryan’s brother-in-law. He stayed at her house in the DC area when he was in the House.

Barack Obama, who likely chose Judge Brown to be Biden’s nominee, tweeted about her nomination to the Supreme Court, saying that she has inspired “young Black women” like his daughters “to set their sites higher.”

I want to congratulate Judge Ketanji Brown Jackson on her nomination to the Supreme Court. Judge Jackson has already inspired young Black women like my daughters to set their sights higher, and her confirmation will help them believe they can be anything they want to be. https://t.co/aCwiUBFTyj

After Barack Obama took credit for nominating Joe’s woke pick “twice,” he explained that she understands law “isn’t just about abstract theory.” Is that the liberal’s new buzzword for the US Constitution—“abstract theory?”

As a protégé of Justice Breyer, Judge Jackson earned a reputation for pragmatism and consensus building. It’s part of why I nominated her twice – first as a district judge, and then to the U.S. Sentencing Commission, where she earned praise from both Democrats and Republicans.