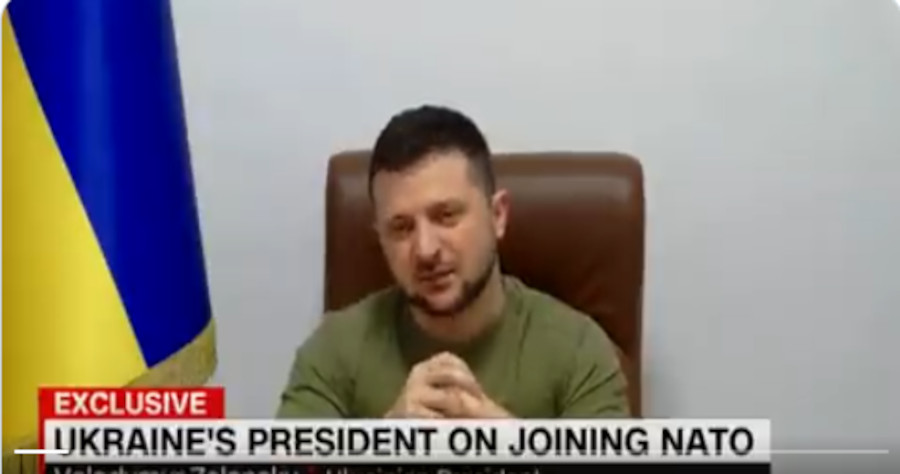 Last month, Russia launched an invasion against Ukraine that has killed tens of thousands of people to date and brought mass destruction to almost every major Ukrainian city.

One of the primary reasons that Putin invaded Ukraine was his fear that the country was re-aligning with the West and could join NATO, further encircling Russia militarily and putting the hostile military alliance directly on his country’s western border.

Ukraine has had aspirations to join NATO since 2008 when it became a part of the alliance’s MAP program which would have put it on track to join at a later point.

Now, Ukraine’s President has revealed that President Biden and other NATO countries had no interest in admitting Ukraine to NATO. Despite this, President Biden wanted Zelensky to pretend that there was a chance they could be admitted to antagonize Russia.

During the interview, Zelensky said that NATO and EU countries told him that Ukraine would not be admitted to either the European Union or NATO, but ‘publicly, the doors would remain open’. WATCH:

Pt. 2 of my exclusive interview w/ Ukrainian Pres. @ZelenskyyUa: Ukraine’s relationship w/ NATO & the EU, & the “limbo” in which his country finds itself pic.twitter.com/1u6Z3mCDRe

Its very likely that a public admission from EU and NATO countries that there was little interest in admitting Ukraine could have prevented an invasion of Ukraine by Russia.

Leaked diplomatic cables in 2008 more or less predicted the Russian invasion of Ukraine by explaining that NATO enlargement in to Ukraine or Russia would be a ‘red line’ for Russia, yet the US and NATO countries have refused to give Russia reassurances that they would not admit Ukraine to NATO.

” Following a muted first reaction to Ukraine’s intent to seek a NATO Membership Action Plan (MAP) at the Bucharest summit (ref A), Foreign Minister Lavrov and other senior officials have reiterated strong opposition, stressing that Russia would view further eastward expansion as a potential military threat. NATO enlargement, particularly to Ukraine, remains “an emotional and neuralgic” issue for Russia, but strategic policy considerations also underlie strong opposition to NATO membership for Ukraine and Georgia. In Ukraine, these include fears that the issue could potentially split the country in two, leading to violence or even, some claim, civil war, which would force Russia to decide whether to intervene.” Said then U.S Ambassador to Russia William Burns.