Canceling Beethoven: Who’s Relevant to Whom? 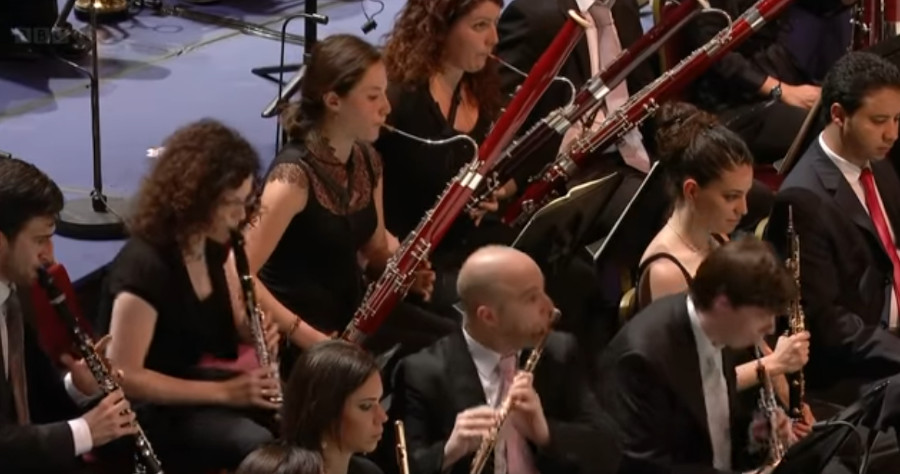 Breathing fire from your presence

To your temple ground we come.”

This is the invocation of joy that begins Friedrich Schiller’s great Ode, whose first three stanzas were set by Beethoven in the final movement of his 9th Symphony. Baltimore Symphony conductor Marin Alsop has replaced them with doggerel from a local rapper. She explained to Baltimore magazine:

You know, the [Friedrich] Schiller poetry is phenomenal, but it’s not relevant for us today. The word “Joy” meant something different in his day. Schiller was revolutionary because the idea of individuality and individual freedom was something very new back then. I [thought], why don’t we consider reimagining the text? With the same themes, the global themes of unification, tolerance, humanity, humankind, and joy. And what is joy really?

This is idiotic in more ways than I can list. What does it mean to be relevant? A woman once remarked to Rabbi Abraham Joshua Heschel that the prayer book didn’t seem relevant to her, to which Heschel responded that the point was to make herself relevant to the prayer book. Schiller was one of the universal geniuses who defined our era, and our job is to make ourselves relevant to him.

Schiller’s great ode (of which Beethoven set three stanzas) is a riposte to the mechanistic rationalism of the 18th-century Enlightenment:

Joy’s the mainspring that empowers

The eternal hand of time;

In the universal chime,

Sending stars into their races,

Raising flowers from the dew,

Rolling planets through the spaces

That the spyglass never knew!

It demands that we lift our eyes to the stars and to the supreme Judge who dwells above them:

Joy pours bubbling in the golden

Blood decanted from the vine;

And the brute be tamed in wine!

When the Jeroboam passes

Leave your seats and lift your glasses

To the Judge beyond the stars

Whom the bright seraphic chorus

And the planets’ circling tells.

Lift your glass to Him who dwells

Above the field of stars before us!

On the centenary of Schiller’s death in 1859, Rabbi Samson Raphael Hirsch, the most influential Orthodox Jewish thinker in Germany, delivered a speech praising the poet as a benefactor of all mankind.

Poetry translation is a failure under the best of circumstances, and German, with its extreme concision, is especially hard to translate. My miserably inadequate attempt to render the verses above is a horrible example of that general rule. But I feel obliged to do something for Schiller’s blessed memory after Marin Alsop’s despicable act of desecration. So here, for what it’s worth, is my translation of Schiller’s poem “The Favor of the Moment.” The “Ode to Joy” was a youthful work; this is a mature reflection on the same theme. A philosopher as well as a poet, Schiller combined the two modes of expression in a unique way. The latter poem is a meditation on the nature of beauty, joy, and time. For a discussion of the poem’s philosophical importance, see this essay in Hakirah.

Consider it my small and most inadequate contribution to sustaining the memory of a great mind that has been canceled by the Woke plague in our mainstream institutions.

“The Favor of the Moment” (“Die Gunst des Augenblicks”)

Once again in merry meeting
We rejoin the ancient round;
New and green the singer’s fleeting
Wreath of laurel shall be wound.

But to which Immortal bring we
First an offering of song?
First before all others sing we
Him who send us joy along.

What if Ceres merely nourish
Us with life-sustaining bread?
Or if Bacchus’ vineyard flourish
And the wine run purple-red?

But if Heaven’s spark appear, it
Lights a flame of sacred art
For the fire-drunken spirit,
For the overflowing heart

From the gods like summer showers
Blessing falls from cloudless sky
And the mightiest of powers
In the twinkling of an eye.

From the first of all endeavor
When the universe was wrought,
The divine on earth has ever
Been a lightning-flash of thought.

Stone by stone the work arises;
Slow the hours pass on earth.
Swift the work’s design surprises
Swift the spirit gave it birth.

As the sunlight’s sparkling glances
Weave a tapestry of hue,
When immortal Iris dances
In a rain-cloud passing through,

So the Beautiful must vanish
Like the fleeting spark of light
That the stormy vapors banish
To the darkling grave of night.