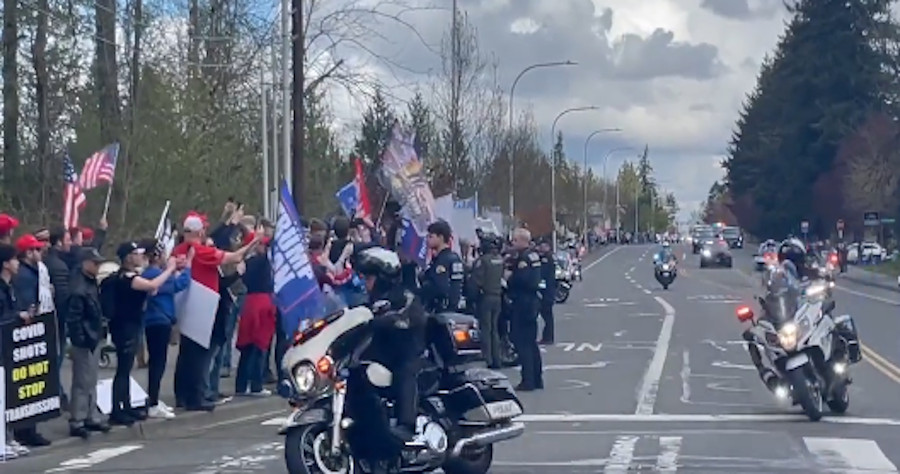 The guy who supposedly won the most votes in the history of this great nation, can’t go anywhere without being told to “F OFF” by the American people.

It always amazes me that none of Joe’s “81 million” voters come out to show him support. Especially in a liberal stronghold like Seattle. Instead, the streets are lined with Trump flags, and supporters, chanting “Let’s Go Brandon.” Is that how the most popular politician in the history of the country is treated?

Well, that’s exactly what happened just outside of Seattle, when Joe showed up to honor “Earth Day.” Yep, nothing says “Earth Day” like flying in on a gigantic private jet and driving around in a 78-car motorcade. If it wasn’t for “bad optics,” the Biden admin would have no optics.

“Joe Biden arrives at Green River College near Seattle,WA for a earth day speech, with a warm welcome of “Let’s Go Brandon” chants.”

Of course, people loved seeing this…

“Now that’s climate control old man ! Plus those people there are all for President Trump !!”

“Why doesn’t any of his supporters ever show up anywhere?”

“On Earth Day Joe spews pollutants into the air in Seattle. I can’t believe I voted for this idiot”

“Nothing says Earth Day like showing up in 35 plus vehicles. #LetsGoBrandon“

“When you’ve lost Seattle, the battle is over.”

“This just made my day LOL”

Trust me, nothing frustrates Joe and his fake admin more than Trump supporters lining the streets, shouting “Let’s Go Brandon.”

Keep it up, patriots!