It’s On! Chelsea Handler Gives Joy Reid A Run For Her Money On Achieving Peak Stupidity Over Manchin Let Down 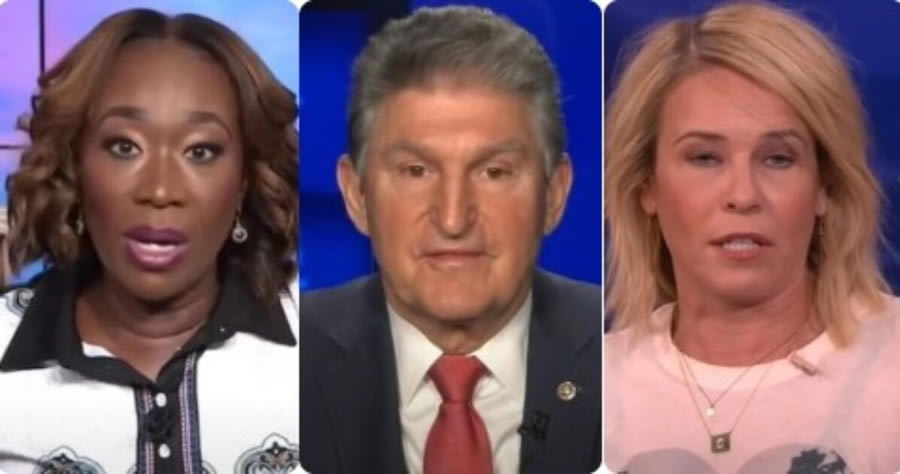 Condescending liberals are still experiencing political PTSD after U.S. Sen. Joe Manchin (D-WVA.) announced that he is a no vote on the massive Biden administration spending spree known as the Build Back Better plan.

The now-repentant Andrew Cuomo fangirl and comedienne Chelsea Handler also chimed in, but both discovered that social media was hardly receptive to their insight, such as it is, about current events.

Manchin has said of BBB that “if I can’t go home and explain it to the people of West Virginia, I can’t vote for it,” particularly underscoring the already-soaring, rampant inflation that is harming his constituents.

Reid took to Twitter with another apparent conspiracy theory, which also contained a not-so-veiled reference to GOP Sens. Mitch McConnell and Rand Paul of Kentucky in addition to Manchin.

Anybody ever wonder: how can West Virginia and Kentucky have such powerful United States Senators repping them yet be so overwhelmingly poor? Somebody’s getting that money, and it ain’t ordinary West Virginians and Kentuckians… just a thought… pic.twitter.com/T7stjm1WY6

Obviously, poverty (and other social ills) is also in many jurisdictions controlled by Democrats, including those blue enclaves within red states.

Congrats to Joe Manchin for competing to be more hated than omicron this holiday season.

I love the way you completely ignore the other 50 senators who voted with Manchin.

He did exactly what was agreed with Schumer 5 months ago. Cry more pic.twitter.com/l7plDHACuZ