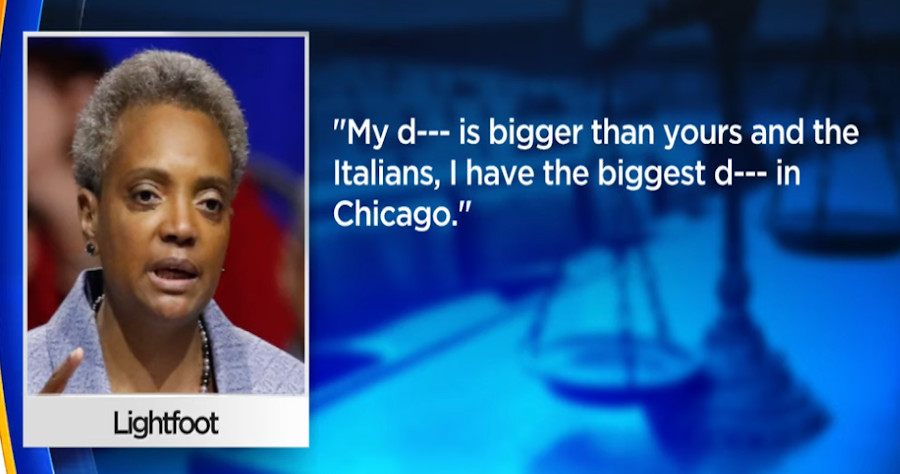 A former Chicago city attorney alleged that Democratic Mayor Lori Lightfoot claimed to have a “bigger” “dick” than several city employees and Italian Americans suing the city over the removal of two Christopher Columbus statues.

Former Chicago Park District deputy general counsel George P. Smyrniotis participated in negotiations with an Italian American organization over the removal of the statues, which stood in Grant Park and Arrigo Park until Lightfoot ordered them taken down during the 2020 Black Lives Matter protests. The Joint Civic Committee of Italian Americans (JCCIA) sued Chicago in July 2021, alleging that the Arrigo Park removal violated a 1973 agreement.

Smyrniotis was told by a superior that the city wanted the JCCIA lawsuit settled “as soon as possible,” his lawsuit alleges. As a result, he and lead attorney Timothy King agreed that the JCCIA could display the statue in its Columbus Day parade in hopes that it would help with the settlement talks.

However, Lightfoot objected to the agreement, and threatened to cancel the permit for the parade if the JCCIA attempted to feature the statue.

NEWS: A lawsuit against the city by a former Park District attorney alleges that Mayor Lori Lightfoot berated staff in obscene terms over Columbus statue, told them “My dick is bigger than yours and the Italians, I have the biggest dick in Chicago.” https://t.co/I542wZrbPF pic.twitter.com/7wPdhpto09

“You dicks, what the fuck were you thinking? You make some kind of secret agreement with Italians, what you are doing,” Lightfoot said on a Zoom call that included Smyrniotis and five other employees, according to the lawsuit. “You are out there measuring your dicks with the Italians seeing whose got the biggest dick, you are out there stroking your dicks over the Columbus statue, I am trying to stop Chicago Police officers from being shot and you are trying to get them shot. My dick is bigger than yours and the Italians, I have the biggest dick in Chicago. Where did you go to law school? Did you even go to law school? Do you even have a law license?”

Smyrniotis claims that Lightfoot’s rant was defamatory because she implied that he “lacked an ability to do his job duties.” He argues that her comments also forced him to resign in February before his scheduled retirement, causing him to suffer “lost income, a reduced pension, and … extreme emotional distress.” He is requesting $50,000 in damages, plus legal fees.

Lightfoot’s office did not respond to the Daily Caller’s request for comment on the matter.

First elected in 2019, Lightfoot and her office have been named as defendants in several lawsuits alleging unprofessional or illegal behavior. The Daily Caller News Foundation and Judicial Watch sued Lightfoot in May 2021 after she announced that she would only grant interviews to “black or brown journalists.”