Chief Globalist Klaus Schwab, Who Dreams Of Installing Chips Into Citizen’s Brains, Tells Members of World Economic Forum: “The future is being built by us!” [VIDEO] 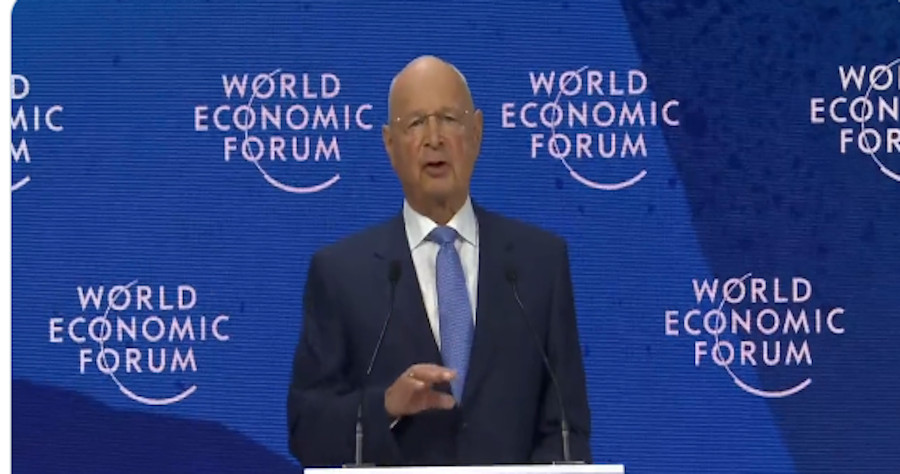 On Sunday, the World Health Organization – which the United States recently rejoined under the Biden regime – launched its 75th World Health Assembly in Davos, Switzerland, where it is set to discuss a potential ‘”Global Pandemic Treaty.”

The World Economic Forum is the driver of the concept of “stakeholders” (i.e. socialism) as opposed to “shareholders” in corporations. This removes a company’s profit motive and pushes industry naturally toward the government, which rewards compliance with leftist narratives.

Klaus Schwab’s stakeholder movement makes companies beholden to governments and squashes small businesses, which are unable to compete with corporations that have the backing of the taxpayer.

In a 2016 interview with a Swiss reporter, Klaus Schwab explained how in the next 10 years, citizens would have chips implanted first into their clothing and then into our brains or our skin that will create a direct path between our brains and the internet.

Remember when everyone was freaking out about rumors spreading about the government wanting to install chips in the bodies of citizens to help track COVID-positive patients? Many are now concerned that the world is about to cede our health to those who imagine the kind of future where people will have chips implanted in their brains or skin that could track their every movement.

This morning, the world’s chief globalist and one-world-order advocate Klaus Schwab told the attendees at his World Economic Forum in Davos, “the future is being built by us!”

NEW – Klaus Schwab tells attendees at his World Economic Forum in Davos that “the future is being built by us.” pic.twitter.com/yIqB4jclNd

This treaty has been touted as a simple plan to develop and coordinate global strategies for future pandemics. Although it has been generally kept out of the news, it is beginning to gain widespread interest among the public as many begin to question the true nature of this proposed agreement.

Your health future is being determined right now at the WHO in the building behind me, and your Senator is partying with Klaus Schwab 200 miles away. pic.twitter.com/D8wPNgcoho

Last week, Tucker Carlson rang the alarm bells on this treaty, warning the American people that this endangers our democracy and our personal freedoms and that America may be ceding our power to the WHO at the Davos summit.

On Thursday’s segment of Tucker Carlson Tonight, the top-rated Fox News host expressed his concerns over the control being given to the WHO over our public health system.

“The Biden administration is very close to handing the World Health Organization power over every aspect, the intimate aspects, of your life,” warned Carlson. “So, imagine the civil liberties abuses that you lived through during the COVID lockdowns, but permanent and administered from a foreign country.”

Carlson then explains that this treaty will grant the WHO the power to lead, convene, and coordinate “operational aspects of emergency responses to a pandemic,” effectively giving the organization the power to define what a pandemic is, when it’s in progress, and how long the pandemic lasts. Carlson also warns that, should this treaty be agreed upon, the WHO will have “total authority over emergency operations in the United States.”

The WHO will be given the authority to declare and define “public health emergencies” for the entire world, which Carlson explains is a dangerous amount of power to be wielded by an organization that is entirely led by “unelected bureaucrats.” Carlson adds that thanks to the Biden regime’s involvement, “there is no limit at all on WHO’s power.”

He explains that if the members of the WHO don’t enforce the organization’s orders, they will be sanctioned. Carlson then goes on to explain that the WHO is comprised of unelected individuals that are led by Tedros Adhanom Ghebreyesus, a former member of Ethiopia’s Marxist-Leninist Party and former leader of the Ethiopian Ministry of Health. Although he is not a doctor, due to his political status, Ghebreysus is about to be granted “operational control over our government’s public health system.”

Carlson informs his viewers that Ghebreyesus was responsible for covering up three cholera outbreaks in Ethiopia. He also adds that Ghebreyesus attempted to appoint Robert Mugabe, “the racist murderer who ran Zimbabwe into the ground,” as the international goodwill ambassador for public health. Dr. Fauci, however, considers Ghebreyesus a close friend, openly praising him for being an “outstanding person.”

Not only will these unelected political figures be granted the authority to control the U.S.’s public health system but they will also be given the ability to censor any “misinformation” they detect on social media. This new treaty explicitly demands “national and global coordinated actions to address the misinformation, disinformation, and stigmatization that undermine public health.”

The treaty gives the WHO Secretariat the power to “build capacity and to deploy proactive countermeasures against misinformation and social media attacks,” effectively granting them the right to censorship, as Carlson explains.

If all of this wasn’t enough, the pandemic treaty also states that the WHO will “develop standards for producing a digital version of the International Certificate of vaccination and prophylaxis,” giving the WHO full authority over vaccine passports and travel.

“Under this treaty, the World Health Organization will get to establish vaccine passports and regulate travel,” explains Carlson.

In summation, an individual who was not elected by the American people will be in charge of lockdowns, vaccine manufacturing and distribution, public discourse surrounding matters of public health, travel allowances, and what constitutes a “public health emergency.” This is a shocking amount of authority given to a body of individuals that were not chosen by the American people to make decisions for us.

What do you think? Should America be ceding our health decisions to a group of globalist billionaires? And does anyone truly believe Joe Biden is acting in the best interests of Americans?