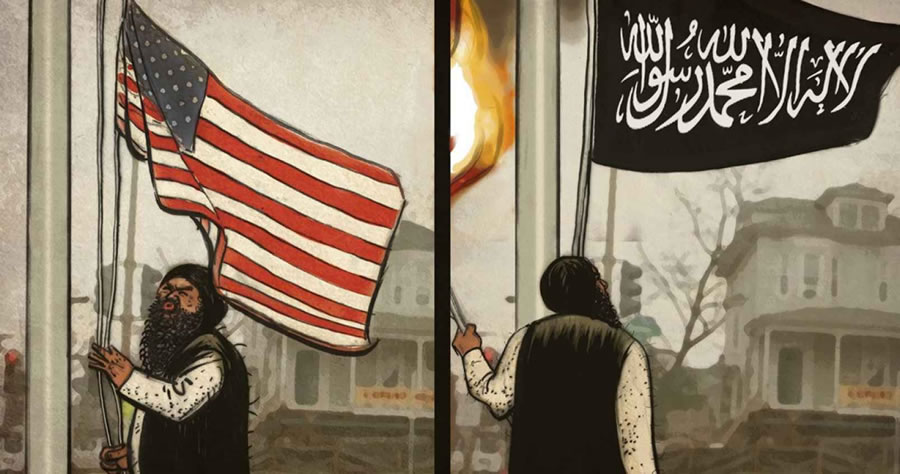 Biden didn’t withdraw from Afghanistan. He brought Afghanistan to America.
The skies over Sparta have never been as busy as when the Biden administration decided to dispatch 13,000 Afghans, including at least one pedophile, to Wisconsin.

Sparta, a small town of less than ten thousand souls, whose claim to fame is being the “Bicycling Capital of America”, could only watch as a population of Afghans outnumbering its own population created a new Afghanistan on the premises of Fort McCoy.

None of the Afghans at Fort McCoy have a Special Immigrant Visa. Biden left the SIV visa holders behind in Afghanistan. The Afghans who have overrun the Wisconsin base are the ones whom the Taliban, for their own reasons, decided to allow through their checkpoints.

And they’re living up to the high cultural standards of the Taliban.

The problems began with the toilets. Then there were issues with the rice, the sexual abuse of young boys, and Afghans simply leaving on their own despite promises of taxpayer cash.

“Afghans were confused and upset by hygiene practices,” a Wall Street Journal article described. “Every toilet on base was Western style, with a seat and toilet paper. But a number of Afghans are accustomed to restrooms that allow them to squat so they don’t have to physically touch the toilet. It led to some cases of Afghans relieving themselves outside.”

This shouldn’t have surprised anyone after two decades in Afghanistan. But political correctness has mostly suppressed accounts of even the most basic facts about the beneficiaries of our great nation building project leaving Americans confused by the behavior of the new arrivals.