Conservative Revolution: What If 2024 Is A Replication Of 1980 When Reagan Followed Carter? 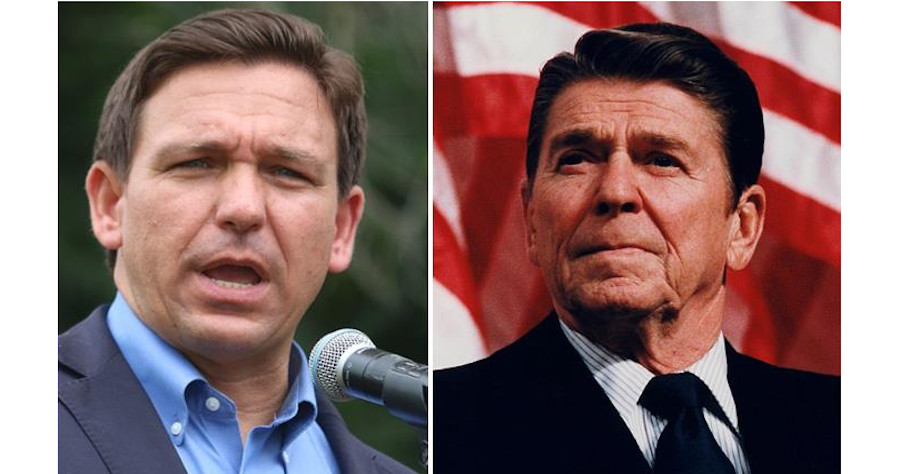 Last night we visited our neighbors who, just like us, recently escaped California. They loved their posh and artsy life in the beautiful Sonoma wine country, but three years of fires and the constant barrage of liberal politics finally pushed them to leave. By the end of the evening, the lady told us how blessed she felt to now live in Florida. “Blessed” – that’s the word she used.

A strong word – but not surprising. I am used to hearing it from every “refugee” from liberal states that I meet. All former residents of the blue states – from regular people to celebrities – share the same sentiment. Everyone feels that Florida is a beautiful and blissful home to them. This is the feeling that I am very familiar with. It’s been almost a year since we have been living in Florida, and I still wake up every morning feeling exceptionally lucky.

Here, an evening walk does not turn into a political rally where the front lawn signs barrage you with the crazy political agenda of your neighbors.  Here, “being kind” is not synonymous with “being a liberal.”  In souvenir shops, you see “Let’s go Brandon” t-shirts right alongside the rainbow attire.  Most people seem to agree that inflation is not a good thing, and it’s not something we have to suffer through for “the better of mankind.”

On social media, there are plenty of bleeding-heart liberals, but there are just as many people who think like you. They will jump in to agree with you, and they post “politically incorrect” jokes which will make you go: “I can’t believe he just posted that!” You know that in California, the person would immediately be deemed a menace to society and removed, never to be heard from again. A social media debate in a liberal state is very similar to real-life: conservatives disappear.

The upper-middle-class no longer has a home in California. For people considered “wealthy” in most of the country, a house in Palo Alto or Beverly Hills is out of reach. This is where the truly rich (and woke) crowd lives, completely oblivious to the carnage their politics unleashed on the residents who are “unlucky enough” to work for a living. The skyrocketing cost of living is putting luxury houses out of reach of the upper-middle class; “soft on crime” policies brought criminals right to their doorstep, and their common sense “Bourjouis” values are deemed deplorable.

Many of my friends turn inward, finding refuge in their families, their hobbies, and their social circle, trying to pretend that their irrelevance in the direction of the state is not an important factor. But many more feel defeated and disparaged, making a calculation that the high cost they pay for the “privilege” of enjoying the natural wonders of California, or social excitement of New York, or other “perks” the blue states offer is no longer worth the struggle. For many, their destination is Florida.

The architect of “the blue state exodus” is named Ron DeSantis.  In three short years, he turned an evenly divided state of Florida into the heart of conservative resistance.  Just like Ronald Reagan before him, Ron DeSantis is  living proof that true and unabashed conservatism works without a glitch.

Republicans of yesteryear went out of their way to “moderate” their conservative policies. “I am not one of those ‘mean’ conservatives” – many of them would imply. “I am only fiscally conservative”. “I am socially liberal!” – they would proclaim. “If you want to do a sex change on your two-year-old, or have a late-term abortion – I am not here to judge. If that’s what it takes for liberals to like me, this is the compromise I am willing to make.”

In a effort to broaden his voter base, George Bush coined the slogan “compassionate conservatism” – as an admission that before him, only the liberals had a monopoly on “inclusivity.” He utterly failed: during his tenure, and long after him, Republicans continued to be viewed as heartless and hostile to the “downtrodden.” Most Republicans grudgingly embraced that image and gave up on reaching a wider demographic, eventually leading to Mitt Romney’s campaign sinking admission in 2012.

The man who changed that was Donald Trump. Not known as a true conservative, he embraced common sense ideas and rejected crazy left-wing nonsense. But unlike “compassionate conservatives” (or RINOs, as we now call them) he was unapologetic about it. He spoke his mind, and he pushed back on personal attacks. His policies “lifted all boats,” to use a cliché. His economic vision restored America’s prosperity after a steady decline under Obama. And in opposition to the media narrative, the biggest beneficiaries were the poor and the middle class.

The liberals tell you that Donald Trump is “a special kind of evil” – but that is not true. Every Republican that came before him was even worse than the last one. No matter how much a Republican tried to “moderate” their conservative views, everyone was equally smeared and besmirched. Donald Trump knew that “playing nice” with the liberal media was a road to ruin, so he did a 180 on the media. That enraged the media but galvanized his supporters. People hate leaders who surrender – and Donald Trump did not. Still, DJT was not a conservative visionary. He was just a common sense President who knew how to get things done.

Governor DeSantis is conservatism unleashed. Like Ronald Reagan before him, the Governor truly believes that a conservative style of government sans concessions for “likes” brings peace and prosperity. His political vision is simple: don’t follow the polls – drive them, and don’t bend to the tactics of personal destruction.

The Governor faced plenty of that in his relatively short career in the political spotlight.  His brilliant handling of the Covid pandemic was proclaimed a mass murder.  His opponents employed smear merchants to accuse him of data manipulation.  When his family was facing a health crisis, they accused him of dereliction of duty.  They laughed at him when he took on a corporate giant.  After all, nobody is “stupid enough” to reject Disney’s political donations.  Well, the joke is on them.

His stunning record as a governor made DeSantis so effective, and thus, so feared by the left, that liberal news outlets like Politico have a special reporter dedicated to penning daily “gotchas” on the Governor while completely ignoring his monumental successes.  Needless to say, they don’t have any resources to document the monumental failures of the blue state dictators pretending that cheap-shoting DeSantis is a part of their job description: