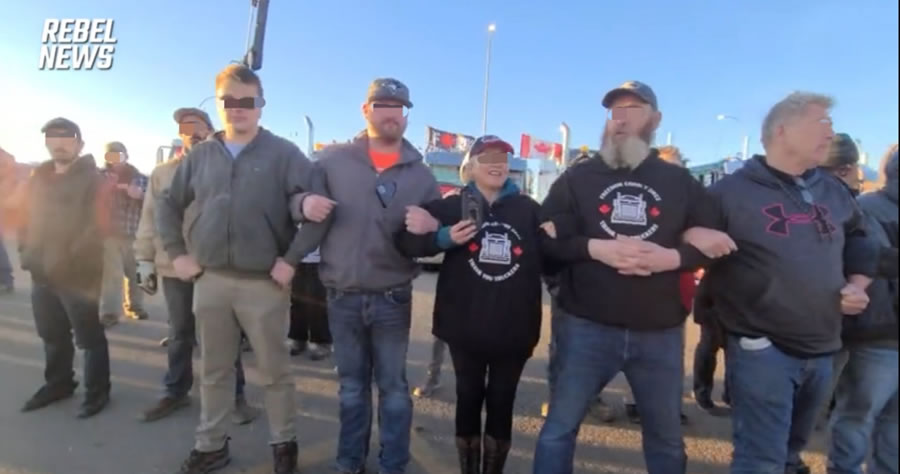 Civil disobedience. This is the way.

Policing requires the public’s compliance – to a degree – and in Canada, enough people have risen up to say no more.Following Justin Trudeau’s panicked announcement that crackdowns are looming, the Royal Canadian Mounted Police (RCMP) held a press conference on Friday, telling the truckers at the Milk River protest site in Alberta to clear out by 1pm, or else they would face consequences.

According to Rebel News, Police provided little information about what the punishment for staying would be, stating only that they would be enforcing the law on anyone who remained in the area – in other words, the RCMP was casting a vague threat of arrests.

The 1PM deadline came and passed, with absolutely nobody moving, but what happened next was truly awe-inspiring. A few hours later when a sudden barrage of officers arrived to move in on the group, the convoy participants gathered together and linked arms, forming a line around the Trucks behind them.

“HOLD THE LINE.” WE AREN’T GOING ANYWHERE, they shouted. Some even began praying as the line of cops stared them down.

After about a minute, the crowd breaks out into an acapella version of “Lean on Me” to solidify their show of unity.

Milk River, Alberta🇨🇦: Police came to make arrests and this happened❤️….who would have ever thought Canada would be leading the world, but they are…Holding The Line…this is tyranny and enslavement vs God and liberty! pic.twitter.com/KCWJ9gaWVW

Shocking scenes here just outside of Milk River, AB at the RCMP blockade.