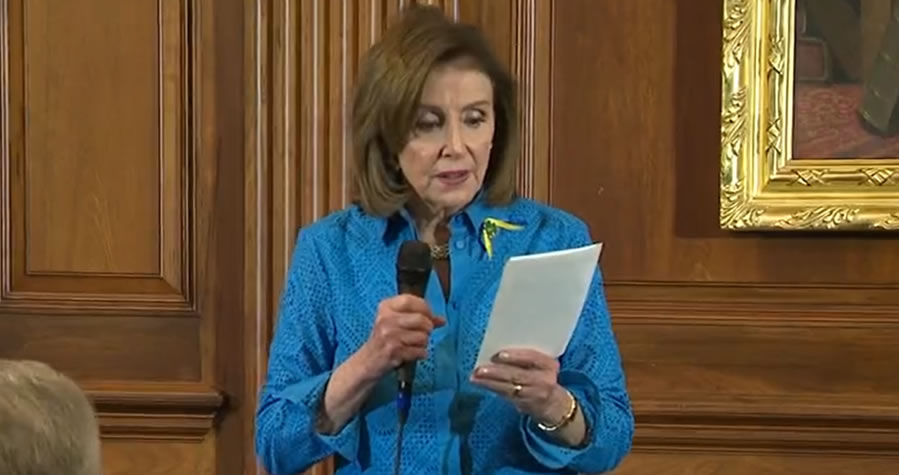 Reviews have been pouring in from Twitter users after Nancy Pelosi took yet another turn into the surreal with a St. Patrick’s Day reading of a poem from global rock superstar Bono, and to say that her performance was rated as cringeworthy is a huge understatement.

Madame Speaker, who is well known for her use of performance art to advance her political agenda, read the new poem penned by the U2 frontman who also fancies himself as an Irish poet, a heart-tugging tribute to Ukrainian President Volodymyr Zelenskyy who has become an inspirational and heroic figure to the Western world for rallying his people against the invading forces of Russian ruler Vladimir Putin.

In the poem, Zelenskyy is reimagined as the namesake for the Irish patron saint who, according to lore, drove the snakes off of the Emerald Isle – only in Bono’s version, it is Putin who is the serpent, a big-time crowd-pleaser for those who attended annual Friends of Ireland luncheon in Washington, D.C.

She then introduces Riverdance. pic.twitter.com/NzPY1VP2bN

“I got this message this morning from Bono,” Pelosi said as she clutched the poem in her hand.

“Most of us always, whether we’re in Ireland or here or whatever it is, Bono has been a very Irish part of our lives, and said this,” she added as she recited the words to those who were in attendance.

“Oh St. Patrick, he drove out the snakes with his prayers, but that’s not all it takes,” read Madame Speaker. “With the smoke symbolizes an evil that arises and hides in your heart as it breaks.”

“And the evil risen from the darkness that lives in some men, but in sorrow and fear, that’s when saints can appear,” she continued. “To drive out those old snakes once again, and they struggle for us to be free from the psycho in this human family.”

“Ireland’s sorrow and pain is now the Ukraine and St. Patrick’s name is now Zelenskyy,” she concluded, chuckling with self-satisfaction as she asked a nearby priest, “you like that, Father?” before introducing the Riverdance performers.

‘I’ve a tradition of sending a limerick to @SpeakerPelosi’s St. Patrick’s Day lunch over the years. This year the limerick is irregular & not funny at all. We stand with the people of Ukraine & their leader. It wasn’t written to be published, but since it’s out, here it is.’-Bono pic.twitter.com/pLkE59DSxU

Isn’t it enough that the eejit BONO goes and hobnobs with the oligarchs at DAVOS every year without getting the eejit Nancy Pelosi to foist his shitty poem on us?

The last time I was in a room with Nancy Pelosi and Bono was at George Soros's wedding in 2013. https://t.co/DgA8S1SLrB

Yesterday she screamed "Glory to Ukraine!" and today she will read a poem from Bono. Our nation is in good (octogenarian) hands https://t.co/2JXLCBozCQ