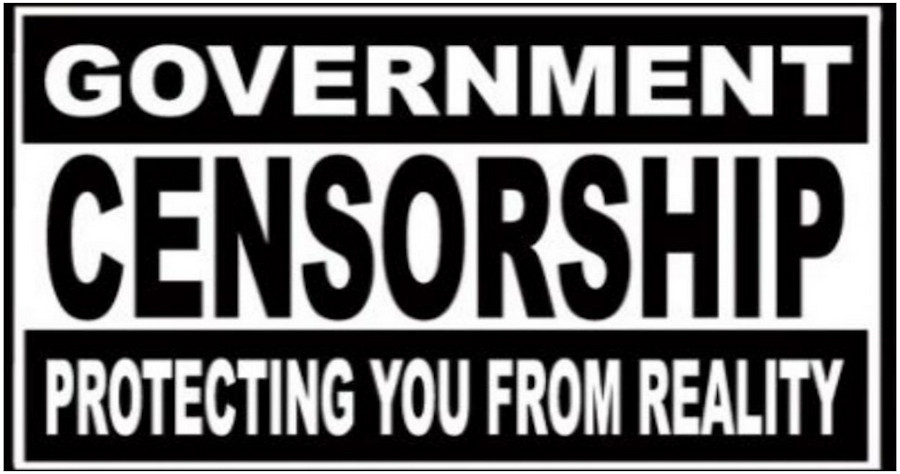 Behind all this is the growing panic in the Left that they are culpable for an enormous raft of crimes committed against their own country, and will eventually end up in court, in prison, or worse….

Since Elon Musk pounced on Twitter, are you not amazed to see just how dedicated to the suppression of speech the Left is? Censorship is the Left’s very spark-of-life. Everything they stand for is so false and lawless that truth magnetically repels them. Now, this may surprise you, but truth and reality are joined at the hip, so when you work hard to suppress one, you are also stomping the face of the other. “Disinformation” just means anything that the Left doesn’t want you to say out loud.

The truth is that everything the Left stands for these days is some kind of a hustle — which is the cheap street version of a racket, meaning an effort to extract something of value from you dishonestly. It’s the only way they know how to operate. It necessarily and chiefly depends on the deployment of lies, which by definition are propositions at odds with reality. The more they traffic in lies, the further they must distance themselves from reality and try to coerce you to go along with evermore absurdity: mostly peaceful riots… men-with-ovaries… free and fair elections… insurrection… conspiracy theories… Lia Thomas in the fast lane… safe and effective vaccines…. Believe it or else!

The Left ends up at war with reality. That adds up to a bad business model for running a society, and the results are now plain to see. What in the USA is not failing these days? Our Potemkin economy of nail parlors, porn sites, pizza huts, casinos, drugs, and helicopter money? Our reckless relations with other countries? Public and higher education? Medicine? Financial markets? The sputtering engine of government under a phantom president? It’s all sinking into chaos and incoherence. For now, food just costs more than ever; wait until it’s simply unavailable. Nobody will care about anything else after that.

All this failure requires cover stories, narratives. Russia did it! Covid-19 did it! White supremacists did it! Trump did it! Narrative failure would equal failure of the Left altogether, so the Left requires the sturdiest possible apparatus for suppressing counter-narratives that lean in the direction of reality, its enemy. The Left found that apparatus in social media, the new vehicle for political debate, especially Twitter, which was so easily, blatantly, and dishonestly manipulated backstage by mysterious code ninjas. Twitter enjoys subsidy relations with government that incline it to do the government’s bidding. In effect, the government enlisted Twitter to undermine and over-ride Americans’ first amendment protections, by proxy.

Now we have the Disinformation Governance Board to be run by a TikTok musical comedy star, Nina Jankowicz, an instant laughingstock, since retailing disinformation has been her main occupation in the scant years she’s been on the Deep State scene. Ms. Jankowicz is a notorious RussiaGate hoaxer and psy-op agent in the October 2020 emergence of Hunter Biden’s laptop. She has zero credibility as anything but a professional falsifier. Her Disinfo Governance Board has no authority to regulate anything. It’s just a lame charade that can only draw more attention to the Left’s hatred of truth and reality. The Left pretends that free speech is a threat to civilization because, as usual, they are projecting psychologically. Their world is a mirror. In fact, the Left is a threat to civilization.

Behind all this is the growing panic in the Left that they are culpable for an enormous raft of crimes committed against their own country, and will eventually end up in court, in prison, or worse. Mr. Durham is just the leading edge of what will eventually be a heavy blade of judgment falling down on their necks. He’s busy sorting out the “Russia collusion” flimflam that turned into a coup to oust Mr. Trump, but that is only the beginning. In November, the Democrats will lose control of Congress and its oversight powers of agency operations, and in 2023 there will be inquiries galore into the neo-Jacobin craziness imposed on our country by the folks behind “Joe Biden.”

That includes such dicey matters as the several years of malevolent mismanagement of Covid-19, which looks more and more like a deliberate effort to kill a large number of citizens, and then moving along to the behind-the-scenes official support for those 2020BLM /Antifa riots, the ballot shenanigans around the last presidential election, the colossal failure to enforce border security (featuring Homeland Security Secretary Alejandro Majorkis), the Biden Regime’s conduct in provoking and prolonging the war between Russia and Ukraine, and (not least) the overseas moneygrubbing of President Biden’s family, as documented in Hunter’s laptop. I’m sure I left a few things out.

If Mr. Biden is still on-the-scene in January next year, he’ll be the first president not only impeached but convicted and removed by the Senate. And if for some reason he avoids criminal prosecution for treason out of some pitiful need for the government to maintain official decorum before the rest of the world, his brothers and his degenerate son may not be so lucky.