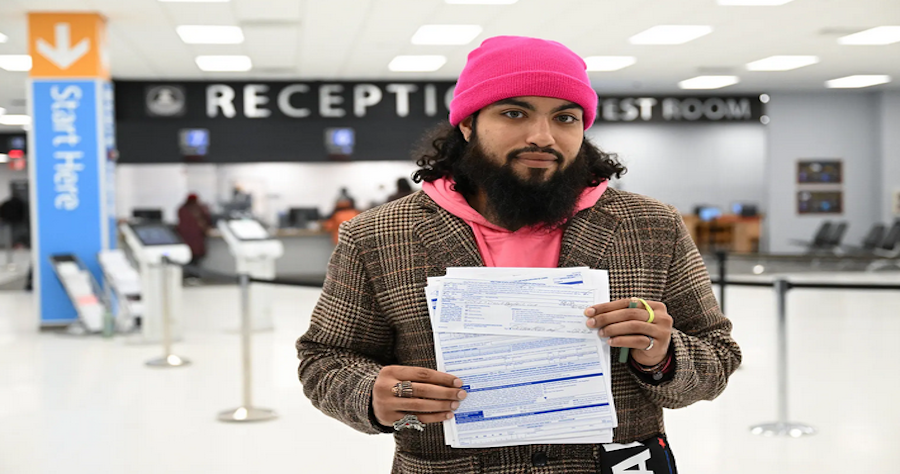 Blacks might be on the cusp of a second Great Migration – this time in the voting booth.

“Black America is wising up to [Democrat failures] and the question now is whether or not it is too late,” said conservative commentator Candace Owens, noting that “every single metric is worse for black America under a Biden presidency than under a Trump presidency,”

There are 30 million voting-age African-Americans, and 92 percent of those who voted pulled the lever for Biden in 2020. But only 69 percent support him today, according to a recent CNN survey. A new Quinnipiac poll put black support for the president at just 58 percent, with 20 percent strongly disapproving of his leadership.

David “Shaman” Ortiz, 29, is among the growing list of disillusioned former Democrats. The bi-racial Brooklyn native, former City Council staffer and political activist marched with Black Lives Matter in 2020. This year he protested outside the US Capitol waving “F–k Biden,” “Let’s Go Brandon” and “Trump 2024” flags, sharing the images on social media.

“I’ve been the boots on the ground for the other side. So I know. It’s time to paint New York City red,” said Ortiz, who recently switched his voter registration from Democrat to Republican.

He said the public education system and left-leaning mainstream media leave black children “malnourished of the truth,” teaching them to believe only Democrats care about their issues, despite what he says is growing evidence that their policies are devastating minority communities.

Black urban communities across the nation beset by social ills have been run almost exclusively by Democrats for decades. Rising crime, failed schools, illegal immigration and anger over COVID mandates are all among issues forcing this constituency to reject the Democrat Party, political observers said. So too is the failure of the Biden Administration to live up to campaign pledges.

“You do realize … a lot of black people feel like Democrats have kept no promises since they’ve been in office,” radio host Charlamagne the God told Transportation Secretary Pete Buttigieg this month.

Conservative commentator and Post contributor Deroy Murdock led a group that filed a lawsuit arguing that a new city law which will allow non-citizens to vote in local elections comes at the expense of African-American voters.

“Black voters finally are concluding that continuing to vote Democrat and expecting improved results is the quintessential definition of insanity,” said Murdock.

Crime continues to ravage the black community in almost all American cities, wildly out of proportion to population. African-Americans were the victims in 65 percent of all NYC murders in 2020, according to NYPD data, despite representing just 20 percent of the city’s population.

Black students, meanwhile, have underperformed their peers for decades in what school Chancellor David Banks called an “outrageous” failure of public education.

The burden of illegal immigration is also unfairly foisted upon African-American communities, pundits say. Illegals captured at the border and then secretly flown into the New York area by the Biden Administration are not placed in cushy Cobble Hill or the Upper East Side. They’re dumped instead on poor, mostly minority neighborhoods and schools.

“I think that the sharp decline in support [for Democrats] correlates directly with the administration’s effort to create a sharp incline in importing Hispanics over the border,” said Owens. “The black vote is being threatened.”

A new generation of black Republicans is hoping to capitalize on disaffected Democrats in November, including US Senate candidate and former NFL star Herschel Walker in Georgia, who raised $5.4 million in the fourth quarter of 2021; Congressional hopeful John James in Michigan; and Minnesota gubernatorial candidate Kendall Qualls.

“The seismic shift is cultural, not political,” said Qualls. “Our cultural roots are faith, family and education, not this crap we see today.”

Walker told The Post: “Across the country, black Americans are realizing that policies from President Biden … are actively failing their communities. We are focused on reducing inflation, restoring public safety, securing our borders, increasing school choice, and addressing mental health — not on dividing people over race.”

“I think the issue Biden is having with black voters is similar to the issues he is having with urban white voters and Latino voters,” said Corbin Trent, the former spokesperson for socialist Congresswoman Alexandria Ocasio-Cortez (D-NY). “They are losing voters of color because they’re not delivering.”

Other minority voting blocs also appear frustrated with Democrat leadership in major American cities, including New York, where Asian and Hispanic voters have shifted votes toward the GOP.

“The Asian community came out strongly in November and they came out and voted Republican,” City Council newcomer Inna Vernikov (R-Brooklyn) told The Post.

Black Americans are already speaking with their feet, fleeing Democrat-controlled inner cities by the millions in recent decades, for safer suburbs or southern states, both of which are less likely to suffer the social ills of one-party Democrat rule.

Crime-ravaged Chicago witnessed an even greater decline, from more than 1 million black residents in 2000 to less than 800,000 in 2020. Chicago has been ruled solely by Democrat mayors since 1931.

“I will be very keen to see what the outcome of the 2024 elections will be and what those exit polls will tell us,” said Owens. “It took a long time but black people are awake.”