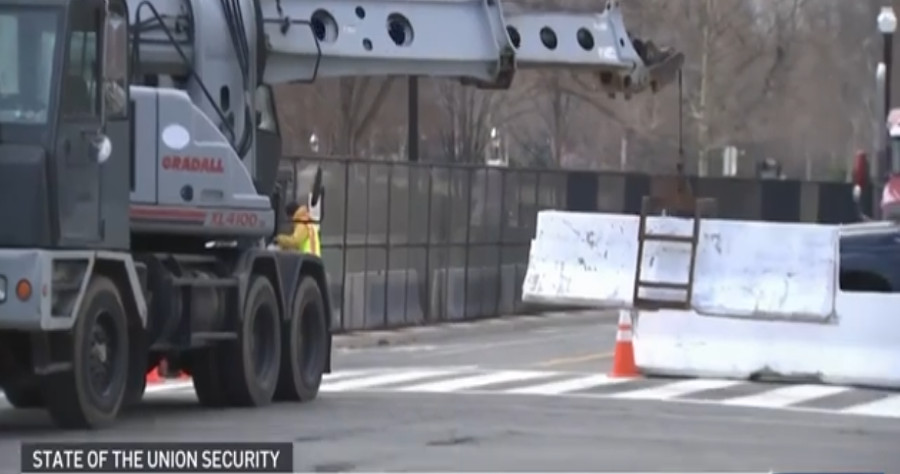 After years of opposition to a southern border wall and even a government shutdown to prevent one, congressional Democrats have become fond of physical barriers on their own doorstep as they deprive Americans of the same protection.

On Sunday, the U.S. Capitol Police confirmed that the same perimeter fencing that surrounded the complex months after last year’s Jan. 6 riot would be restored ahead of President Joe Biden’s State of the Union Address on Tuesday.

“Out of an abundance of caution, and in conjunction with the United States Secret Service, a plan has been approved to put up the inner-perimeter fence around the Capitol building for the State of the Union Address,” said Capitol Police Chief Tom Manger in a press release. “I have also requested support from outside law enforcement agencies as well as the National Guard to assist with our security precautions.”

The fencing was up in 2021 from January through July. It was last installed ahead of a rally for Jan. 6 defendants in September. The barrier’s resurrection comes as Washington, D.C., braces for a U.S. version of the Canadian trucker convoy in peaceful protest of dystopian coronavirus measures. Vehicles are expected to arrive in the capital throughout the week.

“We’re not doing a wall,” Pelosi reiterated in January of 2019 amid a government shutdown provoked by Democrats’ refusal to include wall funding in appropriations. “A wall is an immorality between countries. It’s an old way of thinking.”

Walls between Washington politicians and their constituents, however, are apparently far more necessary.

Democrats, meanwhile, have maintained their opposition to offering the same protection they’ve erected for themselves in the capital to border states. On day one of his presidency, Joe Biden’s first executive orders axed construction of the border wall put underway by Trump.

“It shall be the policy of my Administration that no more American taxpayer dollars be diverted to construct a border wall,” said the order by Biden, whose Tuesday night speech will be protected by a border wall.

The nation’s immigration crisis has reached new heights under Biden, whose 2020 campaign signaled a pledge for open borders, provoking South and Central American caravans to prepare for U.S.-bound travel in the event of a Democrat victory. By the spring of Biden’s first year in office, a humanitarian crisis manifested itself on the southern border with record-high crossings, apprehensions, and drug seizures. The crisis has only continued to swell in the absence of legitimate reform, such as the types of security walls Democrat politicians are eager to use for their own personal protection.