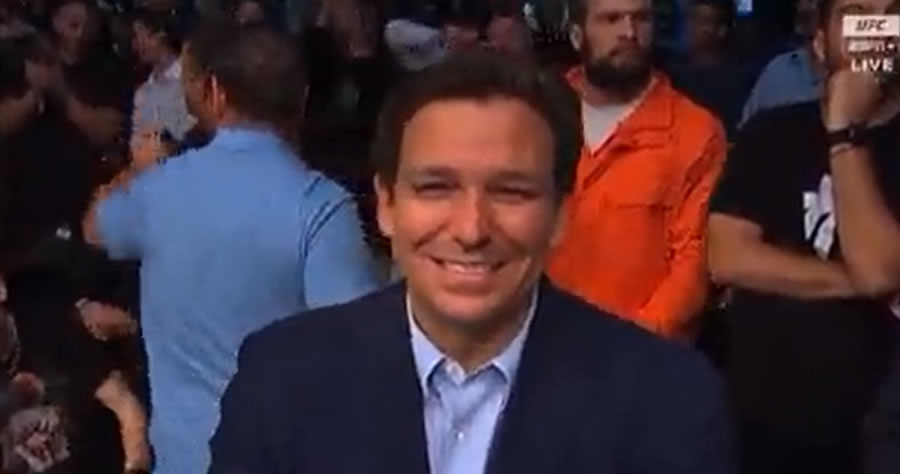 The more we listen to and watch Republican Florida Governor Ron DeSantis speak, the more impressive he is. His skill set, which was partially developed at both Harvard and Yale, is beyond anything we’ve seen from a Democrat in years.

DeSantis’ manner of speaking is commanding but calm. He’s assertive without being overly abrasive. He almost always cites facts and data when making his points, something Democrats almost never do, and as a result, he’s persuasive. DeSantis has a gift. But one of the most impressive aspects of DeSantis’ public speaking skills is his ability to move to and from various topics without coming across as scatterbrained.

Listening to Governor DeSantis speak is like having a fluid conversation with a close friend. One minute you’re talking about home projects that you’re both working on, moments later you’re discussing the previous day’s ballgame, and then suddenly the topic has shifted to which restaurant has the best linguine. Even though the exchange switches directions quickly, it is enjoyable and easy to follow.

Such was the case yesterday during this speech from DeSantis below. And for those who don’t have the time to watch all 34 minutes of the footage, we’ll be summarizing three key takeaways.

The number of topics DeSantis touches on during his comments easily exceeds a dozen and note that for at least five minutes of the video there are other folks speaking. DeSantis hits on gas prices (at 0:58 mark), term limits (at 6:28 mark), and student debt (at 18:45 mark), as well as several others. But let’s focus on three key topics and what the governor had to say:

The Biden Administration’s Ministry of Truth (at 7:47 mark):

“One of the things we’re really concerned about is Biden has created a disinformation bureau, in the Department of Homeland Security, and they have this Nina Jankowicz, who is really off her rocker, that they put in charge of this.”

Not only was DeSantis spot-on, but he was also somewhat prophetic. Within hours of this comment from DeSantis, the DHS announced that the so-called Disinformation Governance Board was being “paused,” and Jankowicz was in fact resigning. Nice call, governor.

“You have a swimmer that swims on the men’s team for three years, and then all of a sudden says ‘I’m going to identify as a woman swimmer and swim against the women.’ And then they give that one the national championship over these women who’ve been training for a long time?”

DeSantis again nails it, and we also see his political instincts coming through. Floridians, and Americans, are compassionate, but we’re also sensible, and the left’s stance on transgenderism is beyond incoherent; it’s insane. DeSantis seems to understand that fact, and focusing on this issue is a winner for him politically, and hammering away at it will only help him. So many Republicans shy away from this subject, but that’s a mistake. Take it head-on like DeSantis. This is how it’s done.

President Biden’s incompetence with the southern border (at 31:05 mark):

“I’ve got money from the legislature available starting in June so that if Biden is busing illegal aliens into our state, we’re taking those buses and rerouting them to Delaware and other jurisdictions. So, stay tuned for that. I just think it’s unbelievable, the failure at the southern border. You know, the thing is, he took an oath, Biden, to support and defend the Constitution, to take care that the laws are faithfully executed, and he is violating his own oath of office.”

He certainly is Governor DeSantis, and it’s refreshing to hear a prominent Republican come out and say it. DeSantis may not be the first governor to reroute buses of illegal immigrants to blue states or Washington D.C., Texas Governor Greg Abbott deserves credit there, but give DeSantis his due for recognizing Abbott’s wisdom.

Indeed, the more we see of Governor DeSantis, the more impressive he seems. In fact, one might even say he increasingly appears to be ‘presidential.’