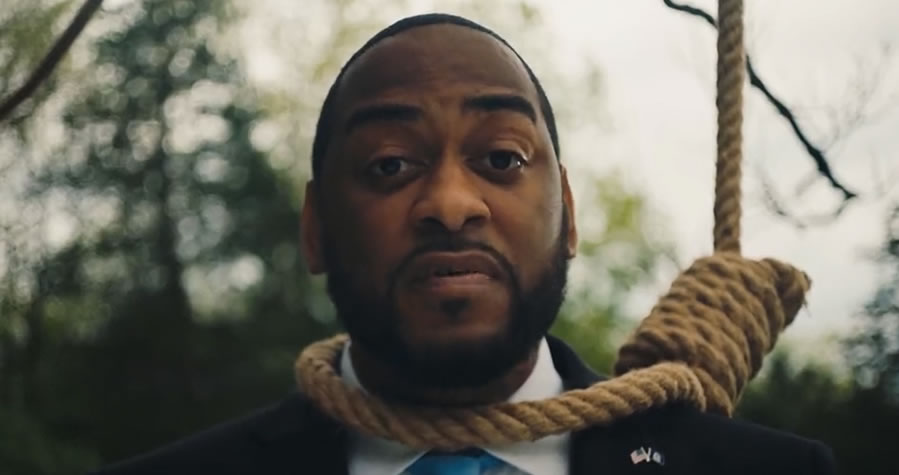 Early Wednesday morning, Charles Booker, the Democratic nominee challenging Sen. Rand Paul (R-KY) showed just how desperate he is when it comes to trying to win. In an ad released on Twitter, in which Booker is actually wearing a noose around his neck, he calls out his opponent for supposedly opposing a federal anti-lynching bill. Not only is the shocking ad disgusting, it’s also leaving out a whole lot of important context that changes the narrative, enough so that even USA Today got involved to point out how wrong Booker is.

For most of the ad, Booker speaks to the camera with a noose around his neck. Grainy footage from lynchings earlier in our country’s history past are shown at one point. The begins with a gallows pole with a noose and the U.S. Capitol in the background, in reference to January 6, 2021, no doubt. “The pain of our past persists to this day,” the ad begins with.

The part of the ad gaining particular attention is Booker’s claim that Paul is “the person who single-handedly blocked an anti-lynching act from being federal law.” As the camera zooms in on the noose, Booker makes the case that “the choice couldn’t be clearer. Do we move forward together? Or do we let politicians like Rand Paul forever hold us back and drive us apart?”

Booker, who is until then was holding onto the noose around his neck, takes it off as he invites Kentuckians to vote for him. “In November, we will choose healing. We will choose Kentucky.”

In this historic election, the choice is clear. Rand Paul may want to divide us, but hate won’t win this time.